Waterfall ice and mixed climbing, once considered a crazy, dangerous sport for only the fiercest of bearded hard men, has moved into the mainstream as an exciting and wildly popular way to enjoy the winter wonder of Jasper National Park. With barely a steady drip of water, the formation of these incredible ice features thoughout the park creates a climbable and dynamic median to test your adventure skills. The largest concentration of established ice routes can be found along the Icefields Parkway, between Lake Louise and Jasper, and is considered to be a world-class ice climbing destination.

Within the mountain National Parks are hundreds of ice climbs. Every type of waterfall ice climb can be found from the long alpine ice routes to short bolted modern mixed and dry tooling routes. Local guidebooks can be purchased at many retail stores in the area.

The earliest ice climbs will form in the higher elevations near the Columbia Icefield on Highway 93 (Icefields Parkway). Some of these routes can form as early as October. By late November many of the waterfall ice climbing routes have started to form in the valley bottoms. It is during the earlier months of the winter before the snow has accumulated in the alpine that many of the larger avalanche prone climbs can be climbed safely. Ice routes are generally in their best condition from December to March. By the middle of March many of the lower elevation ice climbs are starting to melt so that by mid-April only a few climbs remain.

Most ice climbs form in drainage features. During the winter months many of these features are filled with snow and will become avalanche terrain. Even small avalanches can present a significant danger to a precariously balanced ice climber. Recognizing avalanche terrain will help you make more informed decisions. A well advised climber should have a basic avalanche educational course offered through Avalanche Canada. ATES ratings (Avalanche Terrain Exposure Scale) are given to the most popular routes along the Parkway . The Jasper avalanche forecast covers the area from the Maligne Valley south to Saskatchewan River Crossing in Banff National Park. The avalanche danger can change rapidly with changing weather. Be observant of changing conditions and earlier warning signs during your approach and while climbing. These forecasts can be viewed online at Parks Canada Avalanche Bulletins and can be found posted in the Jasper Information Centre and at local Jasper retailers. Many climbs sit below established avalanche paths on the highway marked by no stopping zones, be careful to not stop or park between these signs as you are at danger from avalanches here.

Shorter closures for the Weeping Wall and Polar Circus may be in effect during the day. A sign at the trail approach will indicate if a closure is in effect. Avalanche control activities take place along these sections of the highway and the road may be closed during these times. Road updates are available through Alberta 511 or through real-time updates and anticipatory closures on twitter @ParksMntSafety.

Un-detonated explosives may be encountered in these areas. Do not move or touch any objects that you suspect are explosives and report them immediately to Jasper Dispatch by calling 780-852-6155. 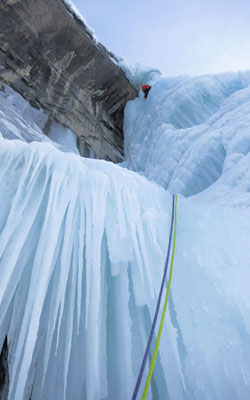 Assume cell coverage is unreliable anywhere in the Jasper backcountry and plan to carry alternative means of outside emergency communication (either a personal locator beacon, satellite phone or emergency satellite communication device). Some local rentals are available in Jasper.

If you are calling for assistance using a cell call 911. If using a satellite phone call
+1-877-852-3100 for Jasper emergency dispatch. Preprogram this number into your device.

Between November and March Highway 93 is a very quiet highway with no vehicle services and infrequent snow ploughs. Established routes are also located along Highway 11 (the David Thompson highway) which joins the Icefields Parkway at Saskatchewan River Crossing.

Maligne Canyon (35 m II, WI 2-6, ATES Class 1)
Park at the Maligne Canyon restaurant parking area on your way up to Maligne Lake, there are phones and outhouses in the parking area. Follow the trail to just past the second bridge where you can access the canyon. There is no formal hiking trail here. Several of the climbs can be accessed from above by rappel and/or for setting up top ropes. If you enter the canyon you do so at your own risk. The canyon is water filled in the summer and can be quite hazardous with thin ice sections over flowing water, collapsing ice shelves and falling ice and rock over-head.

Tangle Creek (60 m I, WI 2, ATES Class 1)
Tangle Falls are located on the north side of Tangle Hill, 7.4 km north of the Icefields Centre along the Icefields Parkway. Park in the ploughed area close to the outhouses. Scramble the rock to climber’s right of the ice climbing to gain access to and from the top of the routes.

Panther Falls (60 m II, WI 3-4, ATES Class 1)
Park in the ploughed viewpoint to Bridal Veil Falls on the Big Bend Hill along the Icefields Parkway. The top of the climb can be accessed from below by following an often snow covered summer trail through the timber below the south end of the parking area. Although there is no avalanche danger on the route, to access the climb from below you will be exposed to some steep avalanche prone slopes. To avoid these entirely you can rappel from the top of the climb to the base of the route. The climb is usually done as 2 pitches with the first pitch starting from inside ‘The Cineplex’ cave, home to ‘The Game’ and ‘Musashi’ (two of the best and hardest modern mixed sport routes in the world). The exit pitch is through a cool Scottish gully like feature. Be aware that there are some deep narrow limestone slots between the top of the climb and the parking area, often completely hidden by snow.

Weeping Wall (180 m II, WI 4-5+, ATES Class 1)
Parking in the ploughed parking area opposite the Weeping Wall 28.6 km to the north of Saskatchaewan River Crossing. A short approach takes you to the base of the route. Several lines exist on the ice curtain. Most climbers walk off to the left across an avalanche prone gully to a rappel station from a tree. The gully is referred to as Snivelling Gully and is a terrain trap for icefall and avalanches. Alternatively, rappel your route from anchor stations on climber’s left of the wall.

Other popular ice and mixed climbs in Jasper National Park

New to or never ice climbed before? Top roping climbing is a good way of increasing your adventure and skill level in a controlled manner. Good venues for this include Maligne Canyon and Tangle Creek. Courses on ice climbing are offered by certified mountain guides at Association of Canadian Mountain Guides and local guiding companies in Jasper.

For current conditions and avalanche bulletins