Tools of the Fire Trade

Whether it’s starting a prescribed fire or extinguishing a wildfire, managing fire on the landscape in our national parks requires a range of equipment to help get the job done.

Mounted on the doorsill of a helicopter, the Aerial Ignition Dispenser (A.I.D. machine) injects small chemical-filled ping-pong balls with glycol. Thirty seconds after dropping from the helicopter, a chemical reaction takes place and the balls burst into flames (eventually disappearing completely), igniting the vegetation around them. 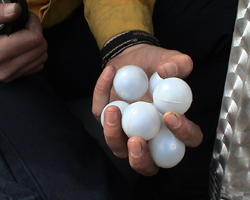 The 20-litre backpack pump has a reflex-action nozzle and weighs about 25 kilograms when full of water. Used to put out small fires, it’s affectionately called a “piss pack”. 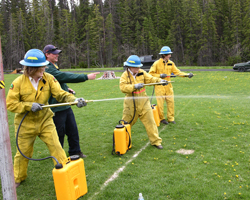 Chainsaws are standard equipment for felling trees and clearing deadfall. They can help firefighters create firebreaks by removing trees in a location ahead of the fire. 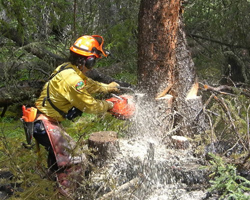 Duct tape is an adhesive used for everything from labelling equipment, assisting with first aid, wrapping around boot tops to keep ash out, covering sharp pulaski blades and making quick equipment repairs on the fireline. Duct tape can be the magical ingredient that holds an entire fire operation together! 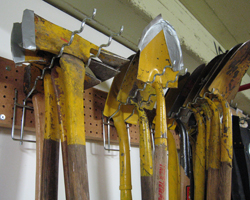 An Equipment Trailer is designed to help fire crews respond quickly to small fires near roadsides and work on small prescribed fires. The units include pumps, hoses, axes, chainsaws, backpack pumps and a variety of other equipment. 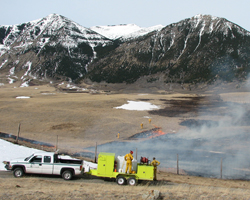 Fire Crew member’s ‘Kit’ includes bright yellow Nomex clothing (a fire retardant material), a hardhat, ear and eye protection, gloves, a whistle and a facemask. The kit is both comfortable and safe. 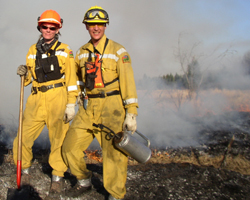 Fire hoses are tested to 300 PSI (Pounds per square inch). The two most common types are: rubber-lined and weeping (small pin-pricks in the material keep the hose moist so it doesn’t burn). 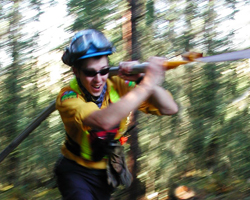 The Flapper is a long-handled tool with a rubber flap used for extinguishing and managing minor grass or meadow fires. It works by removing the oxygen supply to a fire. The concept was developed from aboriginal people who used a wet green pine bough to smother the flames. 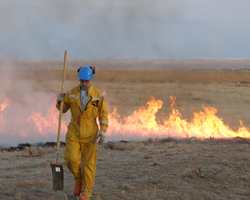 Filled with a mixture of gas and diesel (about 40% gas and 60% diesel) and continuously lit by a wrapped wick, the handheld drip torch is used by firefighters to manually ignite the underbrush and burn surface vegetation. 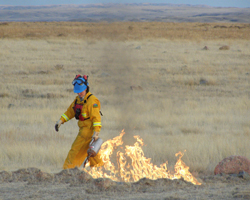 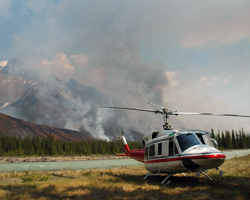 Carried under a helicopter, the Helicopter Bucket is a 200 to 1000-litre bucket for dumping water onto a fire. Helicopter pilots fill up the bucket in nearby lakes and rivers. 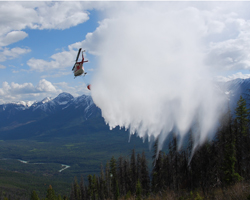 Suspended underneath a helicopter, a heli-torch is a container filled with a fuel mixture. The pilot ignites the mixture onto vegetation for rapid and effective burning on the ground and in treetops. The torch can be used to: 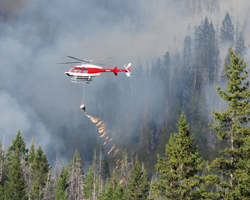 An infra-red scanner is used to detect “hot spots” in a recently burned area. Fire technicians go on scanning flights in the cool morning hours when heat from any remaining fire is easy to distinguish. 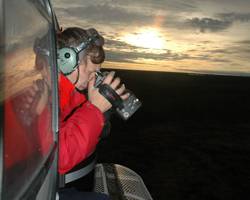 Initial Attack crews are the first people sent to a wildfire. They are highly trained mobile crews of 3 to 6 people. Their job is to hold a fire and bring it under control while it is still small. Initial Attack crews contain most wildfires within 24 hours. 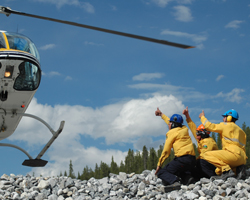 Weighing 25 kilograms, the Mark 3 pump is a portable high-pressure 9-horse power unit that can pump 340 litres per minute. 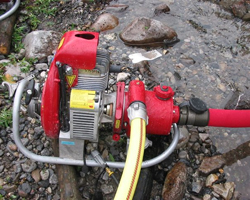 Portable water tanks can be transported by helicopter and used by firefighters in areas where water isn’t available. 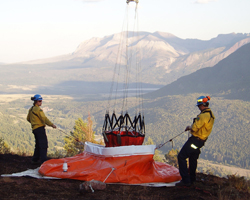 A standard piece of equipment, the Pulaski is used to chop roots and small trees and dig into the soil to help create hand-built fire breaks to stop small ground fires. 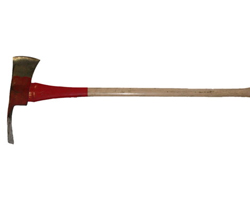 Sending a beam of fire up to 10 metres away the Terra-torch® is pulled behind an all-terrain vehicle or truck to help fire crews create fireguards in preparation for a prescribed fire. The torch, often used in winter or early spring, uses a fuel mixture similar to that used in a heli-torch. 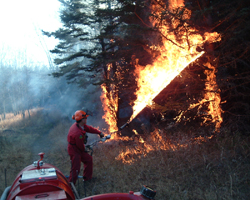