Sightseeing along the Cabot Trail

Some of the most spectacular views in Atlantic Canada

Each exhibit in the park has a different story to tell. 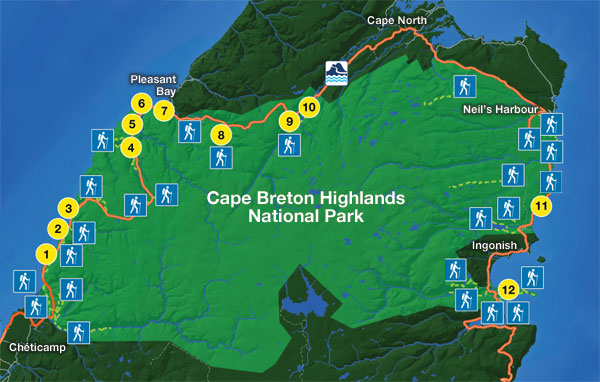 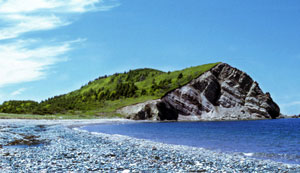 With its rocky cliffs and jagged shoreline, this area doesn't look like an ideal spot for a fishing village. Yet over thirty French families once lived here and made their living from the sea. They even had a cannery. Colourful panels depict the history of the area as you enjoy the great ocean views. It is also a picnic area, so pack a lunch and linger awhile. 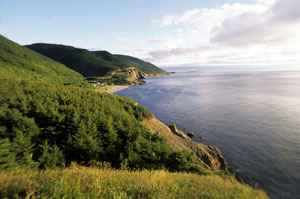 A view of the western coastline from Cap Rouge

Here is a rare opportunity to observe the basic rock types that make up the entire earth's crust—sedimentary, igneous and metamorphic. Spectacular coastal views complement this exhibit. 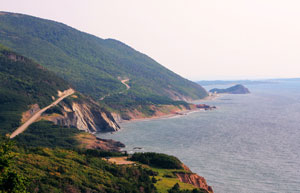 During the Parks Canada centennial year in 1985, this plaque was placed here by the Department of Veteran's Affairs to recognize the contribution of Canadians who died overseas during the World Wars. A similar plaque was unveiled in a national park in each province. The monument stands guard over a commanding view of the western coastline. 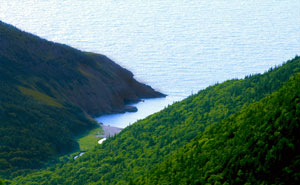 Fishing Cove can be seen from high atop MacKenzie Mountain

Take in the view! 335 metres (1,000 ft) below you lie a small cove and grassy clearing at the base of MacKenzie Mountain which was once a fishing village. Here, the Scottish settlers fished in the Gulf waters and traded with the French for supplies. Fishing Cove is now the site of the only designated wilderness campsite in the park. Camping is restricted to a small number of people at any one time in order to preserve the wilderness experience and reduce impact on the environment. You must register to camp; bring your own camp stove and drinking water. 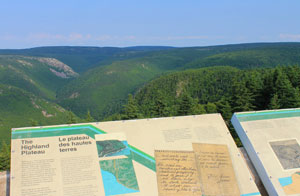 Interpretive panels provide information on the formation of the Highland Plateau

Over 90% of the park's surface area is Highlands Plateau. These seemingly flat-topped mountains are part of what makes this park unique. They make up the largest remaining tract of wild land left in Nova Scotia. With an average elevation of 400 m (1,300 ft), the plateau is a harsh land cut with valleys and pocketed with shallow lakes and bogs. Learn about the bedrock that has resisted change for millions of years, the MacKenzie River as it winds its way through the canyon below or just enjoy the view of the highland plateau as it stretches out before you. 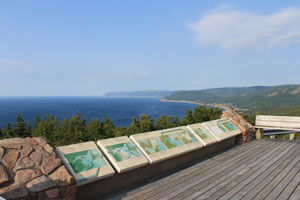 A picturesque look-off overlooking the Gulf of St. Lawrence

It is difficult to discuss the land around you without paying attention also to the water that reaches its shores. The Gulf of St. Lawrence, a strategic waterway Canadian throughout history, still plays a vital role in transportation and in the migration of marine mammals. The waters are warmer and less salty than the Atlantic Ocean. The ocean floor in the Gulf is not unlike the dry land around you—its features are just given different names because they are underwater. The floor is cut by "troughs" (valleys) and has "shelves" (plateaus). The ebb and flow of the Gulf currents are of great interest. Creating a nursery for a variety of fish species, the currents also have an effect on all five provinces that they border. One quarter of the total Canadian fish catch comes from these waters. 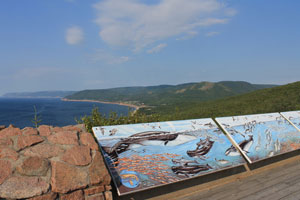 Want to go whale watching? You can actually do it from here! Keep your eyes on the ocean—look for plumes of vapour as whales surface in the Gulf. You'll find a colour exhibit of whales, species of fish, their food sources, various sea birds and life on the ocean floor at this look-off. 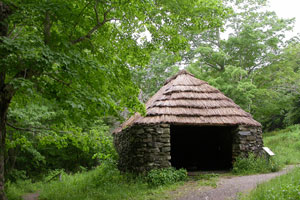 The Lone Shieling, a Scottish crofter's hut nestled in an old-growth forest

This is one of the most protected areas of the park. The 350-year-old sugar maple trees are just part of this virgin forest which is also home to rare animals like the rock vole and Gaspé shrew.

What will catch your eye first is the Lone Shieling itself. An exhibit tells the story of why it's here in our highlands and what it was used for in the highlands of Scotland. The 20-minute walking trail is the only access permitted in this old growth hardwood forest, so please stay on the trail to reduce trampling damage. 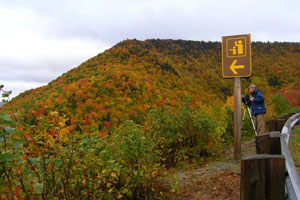 A fault is a crack or fracture in the earth's crust. The Aspy Fault runs inland for about 40 kilometres (24 miles). Land masses move and separate along fault lines. By studying them and comparing rock types, geologists can determine what land masses might once have been connected. Cape Breton may have been joined to Africa at one time. The panels show the fault lines in Cape Breton and how the land formed over time. Find out how a hanging valley is formed. 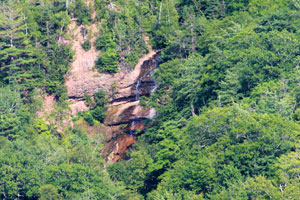 Watch the waterfalls in the Aspy Valley below you as the river winds its way to the Atlantic. The name "Beulach Ban" is Gaelic, a language spoken by the original Scottish settlers. When you reach the base of the mountain, you can drive to the falls. This is a particularly nice area in the autumn when the foliage changes colour. A small picnic area allows for a tranquil lunch. 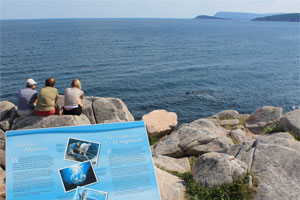 Stop and admire some great views from Lakie's Head

A great spot to watch for whales breaching off shore. Depending on the season, the signs will either explain lobster fishing in the area or how to identify a particular kind of whale. Another panel identifies the sea birds that flit about the coastline. During lobster season, you can watch as fishermen haul up their traps and remove the tasty catch.