Birds are the ultimate tourists in Waterton Lakes National Park. Over 255 species of birds have been recorded here, but most are just visiting. Only 37 species are permanent residents. Another 112 are summer residents and 149 species nest, or are suspected of nesting, in the park.

While they occupy a variety of habitats , birds are generally more abundant in the Montane and Foothills Parkland Ecoregions (as are most of our park visitors!) than in other areas of the park.

The Maskinonge and Waterton Lakes chain are key stopover locations for migrant ducks, geese and swans, particularly in the fall. Most noticeable, and often the first to arrive, are large rafts of coots. Flocks of more common waterfowl join them, as well as tundra swans, cinnamon teal, northern shovelers, and hooded mergansers.

Bald Eagles nest in the park and are seen regularly. Canada Geese nest in ponds and wetlands. One pair, which nests at the gate, has been known to take over an osprey nest before its owners return. Observations of sandhill cranes have increased recently, and these large birds are now nesting in the park.

Passerine (perching) birds prefer forested habitats. Over half of Waterton's 60 native species of songbirds have been recorded in the park's forests, especially the Montane woodlands. These aspen and cottonwood forests are home to many of the warblers that breed in the park, such as orange-crowned and MacGillivray's. 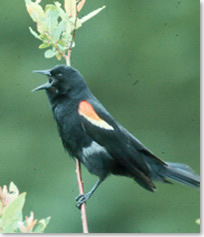 While the Subalpine Ecoregion does not have as many breeding birds as the lower elevation habitats, many of the birds found there are old growth specialists. Red-breasted nuthatches, boreal chickadees and three-toed woodpeckers carve their nests out of decaying conifer stumps.

The Alpine Ecoregion has the fewest species of breeding birds - only those that can survive the short, harsh summers. You can expect to see white-tailed ptarmigan and gray-crowned rosy finches, or the rarer Brewer's sparrow or rock wren.

Monitoring birds is an important way for park staff and scientists to keep tabs on the park's ecological health. Since 1997, they have been monitoring birds through the park's Integrated Ecological Monitoring Program , two aspects of which focus on monitoring songbird breeding frequency and the occupation of raptor nests throughout the park's four ecoregions.

The breeding bird abundance project is designed to detect trends and changes in abundance and diversity of breeding songbirds. A researcher follows a transect, stopping at pre-selected sites to listen for and observe songbirds for five minutes at each location. 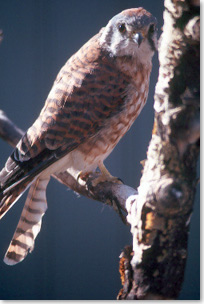 Nearly half of the songbirds detected were migrants from their wintering areas in Central and South America, travelling to nest in Waterton. The Foothills Parkland and Montane Ecoregions have the highest number of songbird species in the park.

The raptor nest occupation and productivity part of the monitoring program tracks the occupation of raptor nests, detects changes in breeding populations and monitors their long-term productivity. Golden eagle, bald eagle, osprey and prairie falcon are the main species being monitored here.

The monitoring program can only be analyzed in the long term, as weather and other environmental factors can cause major fluctuations in bird productivity on a yearly basis.

Bird watching is fun and rewarding for visitors, but respect for wildlife is crucial. Carry a spotting scope or binoculars, which will let you have a close look at the park's birds, without disturbing them.

The park hosts a spring and a Christmas bird count each year, both organized by the Lethbridge Naturalists Society.