Elk, mule and white-tailed deer, moose, bighorn sheep and mountain goat have always been part of the park's natural ecology. The park also maintains a small captive bison herd. You are guaranteed to see some of these species of ungulates if you visit Waterton Lakes National Park.

What are we talking about when we refer to ungulates? Ungulate simply means that these animals have hooves. As well as sharing the same general classification, many occupy overlapping habitats, but much of the similarity ends there.

Deer, elk and moose are members of the cervid (deer) family. They possess true antlers which they shed annually. Antlers are normally only grown by male deer. Bighorn sheep, bison and mountain goat have horns. They are carried by both sexes, are permanent, and grow throughout the life of the mammal. Horns can be used to determine an animal's age.

As members of the bovid family, sheep, mountain goats and bison are more closely related to the domestic cow than their deer counterparts.

Native fescue grasses retain much of their nutrient value through dry spells and the winter season. This is important for bison, mule and white-tailed deer, and the large herds of elk wintering in the park.

The Blakiston fan and other prairie areas near water, including the townsite where cottage leaseholders plant summer gardens, provide a browser's smorgasbord. The aspen groves outlining edges of these prime feeding areas provide shelter out of the wind and offer cover for resting. The canopy of the aspen forests allows sunlight to filter through to the forest floor where plant growth is substantial. Moose also frequent these aspen groves, gnawing on bark and fresh shoots in the spring. 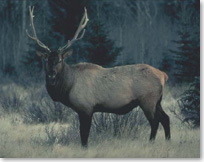 Elk, the second largest deer in the park, are a vital part of Waterton's ecology. A key herbivore , they are also the most numerous large animal in Waterton. As well, elk are a major food source for predators such as cougars.

In summer, elk herds disperse, often migrating to higher elevations. At this time, the females (cows) and their calves forage together while the bulls form separate bachelor groups. During the fall rut (mating season), the bulls gather harems of up to 80 cows. The bull's behaviour then includes thrashing his antlers against bushes, rolling in mud wallows and bugling to attract cows. Equally matched bulls sometimes meet in combat to defend their harems.

Elk are one of the many animal species that move about freely with in the Waterton-Glacier International Peace Park , crossing back and forth over the Canada-USA boundary, as well as onto lands outside the parks.

The largest member of the deer family, moose are easily recognized by their long, thin legs and large overhanging muzzle. Males posses large flattened antlers during the summer and fall months and a growth of skin and hair, called a dewlap, hangs from its neck. Usually solitary, moose are most active at dawn and dusk.

In the winter, moose frequent both Montane and Subalpine Ecoregions where they browse spruce, subalpine fir and shrubs like willows and dogwood. The deep snow at these higher elevation habitats discourages use by elk and deer.

In spring and summer, moose are usually found in wetlands, alongside lakes, streams and rivers, and in areas of new seasonal growth. 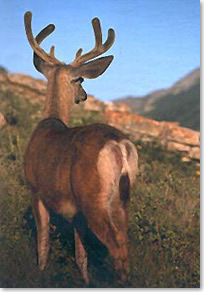 Mule deer are the typical deer of Waterton's mountains, valleys and developed areas. They are easily seen and often do not run away when approached. Many visitors mistakenly believe they are tame and get too close to them. This places them at risk because these deer are wild and unpredictable. Please remember not to approach or feed any wildlife.

Mule deer are sometimes confused with the white-tailed deer because of their white rump. Their distinguishing features include large "mule-like" ears and a black-tipped, white tail.

In summer they eat shrubs and broad-leaved plants, while their winter diet is evergreens, saplings and shrubs. They often share winter range on open slopes and aspen forest with bighorn sheep and elk.

Mule deer have a rather amusing jumping or pogo-stick like gait while running. During the fall rut, the bucks can be seen with swollen necks and polished antlers following does in the typical ungulate male rutting stance -- lowered neck, head held forward, upper lip curled up, and back hunched. Like other deer, twin fawns are the norm, born in early June. During this time does are very protective of their fawns. Dog owners and parents of small children should be wary. 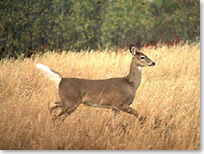 White-tailed deer are common in the aspen groves and prairie grasslands of the Foothills Parkland ecoregion. They are easily identified by their triangular brown tails which, when held upright at any sign of danger, show a white underside (the flag).

Although they tend to be more wary of humans than the mule deer, white-tailed deer have been expanding their range in many places in North America, including Waterton, as they adapt to human-caused changes in the environment. 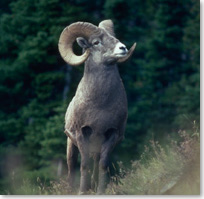 Not to be confused with the shaggy white coat of higher-elevation dwelling mountain goats, bighorns have a sandy-coloured coat and a white rump patch. Only the mature rams have massive curved horns. Immature males and ewe's have short, beige-coloured horns, unlike the black horns worn by goats.

Bighorn sheep are grazers and migrate seasonally between low grassy slopes (winter) and higher mountain meadows (winter and summer). In Waterton, they are often seen on mountain slopes or around developed sites and travel corridors. Their normal diet is grasses, sedges and forbs. Winter range is critical and must be on drier slopes where they can paw through the snow to reach food. Rocky ledges provide important escape routes.

Bighorns form mixed herds in winter and separated herds in summer. The ram herds tend to spend the summer at higher elevations than the ewe herds. During the mating season in the autumn, the rams battle for dominance. This is done according to an established ritual of crashing horns together until the weaker animal gives up.

The Information Centre, Prince of Wales hill, townsite, and Red Rock Canyon are good observation areas for bighorn sheep. They are attracted to these sites because of easy grazing. 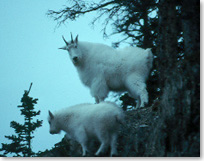 Mountain goats prefer rugged Alpine and Subalpine Ecoregions in backcountry areas of Waterton, such as Goat Lake and Avion Ridge. They are rarely seen because of their cautious nature and rugged habitat. They have white coats, beards, and short, black dagger-like horns carried by both sexes. Females (nannies) and their kids form groups during the summer, while the males billies) are solitary.

Goats do not migrate seasonally, preferring to live year round at high elevations. Goats are sometimes seen on the slopes of Mount Alderson (visible from the Red Rock Canyon parking lot), Upper Rowe Lake and Crypt Lake.

Historically, bison inhabited the prairie and east slopes of the mountains by the millions. Now, a small herd of them is maintained in a paddock near the Pincher Creek entrance.

A trail, exhibit and viewing road are also located there. In winter, the bison are kept in an adjacent open winter paddock and are fed by the park wardens when required. Every few years the herd is culled to keep the population healthy and to make sure the carrying capacity of their paddock range is not exceeded.