A quick check reveals 35 known species of small mammals in Waterton, from mice, shrews and voles to ground squirrels, snowshoe hares and beavers. Except for the shrews, bats and rabbits, these animals are all rodents. While some species are well adapted to the region, others exist at the outer edge of their range. However, they all contribute to the park's unique ecological diversity.

Following is a sampling of the more prominent small mammals in the park.

These ground-dwelling rodents are widespread throughout the park. They are active only during daylight and can be seen popping in and out of their multi-chambered burrows. They stuff their expandable cheek pouches with a variety of seeds, insects and vegetation.

Ground squirrels are especially significant because it seems that 'everything' eats them - from badgers to hawks. While this is an exaggeration, their importance cannot be underestimated.

The Columbian ground squirrel is Waterton's most common ground squirrel. It is often incorrectly called a "gopher." Although they hibernate for up to 7 months, they are a key prey species for grizzly bears, coyotes and golden eagles. They are found throughout the park. Their preference for shorter grass areas has seen them adapt to the Waterton golf course and other open areas with closely mown vegetation.

The only true "gopher" in the park is the nocturnal northern pocket gopher, which is not a ground squirrel. Although common in grasslands, meadows and forest openings from low to middle elevations, the pocket gopher is rarely seen because it spends most of its life underground. It does leave very visible piles of soil on the ground, which let you know it is there.

The thirteen-lined ground squirrel is uncommon and may be mistaken for a chipmunk. It lacks stripes on its face though, and the stripe and dots pattern on its back is quite different. This ground squirrel prefers grasslands, particularly near shrubby areas or aspen trees. Its burrow lacks the tell-tale dirt mounds of other ground squirrels.

The red squirrel dwells in the coniferous forests within in the Montane and Lower Subalpine Ecoregions. It spends the winter underground, but builds tree nests the rest of the year.

A sure sign of the red squirrel's presence is small piles of discarded cone pieces found on logs or stumps, or huge piles found on the forest floor (called middens). Their loud, territorial 'churring' is an often heard sound in the forest. 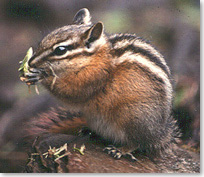 Chipmunks are the busy speedsters of the forest, with their black racing stripes and long tails. Many people are surprised to find out there are different kinds.

Red-tailed chipmunks tend to occupy higher elevations in the Subalpine Ecoregion, while yellow-pine chipmunks generally stay at lower elevations from the Foothills Parkland to the Lower Subalpine.

Well named, the least chipmunk is the smallest, and lives in rocky places near timberline.

The only 'rabbit' in the park, the snowshoe hare is easily recognized by its long, black-tipped ears and large hind feet. Their 'snowshoe' feet are heavily furred to make travel in deep snow easier. As winter approaches their coat turns from brown to snow white. Snowshoe hares are the main food source for pine marten and lynx populations.

Pikas or 'rock rabbits' live in rock slides and nearby meadows, mainly in the Upper Subalpine and Alpine Ecoregions. Small and well camouflaged, pikas are usually located by their piercing, high-pitched "eep" alarm call. They eat wildflowers, lichens and grasses, some of which they collect, dry in the sun and stash for winter snacks. 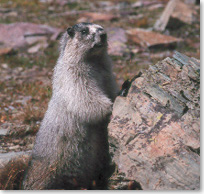 Hoary Marmots are colonial animals that can be found in the same habitats as the pika. They are one of the largest rodents in the park, reaching weights of up to 15 kilos. They need that weight because they pig out for three months of the year, then sleep for nine.

A fat marmot is often seen sunning on a rock as it carries out 'sentry' duties. The marmot produces a loud whistle when alarmed, then hurries to hide in its rocky burrow. 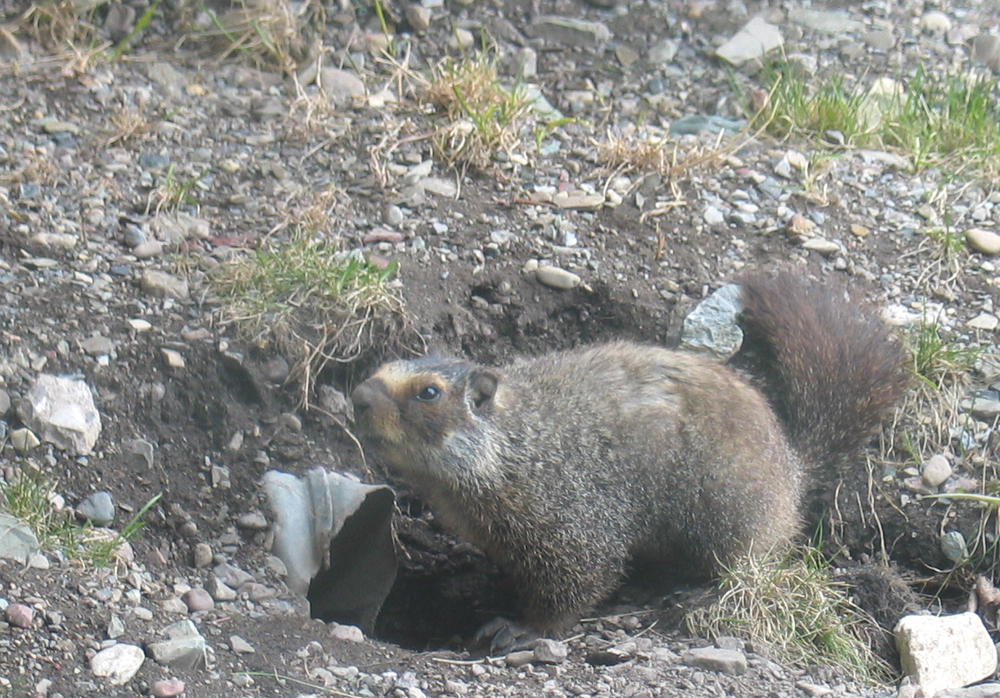 These tawny-coloured marmots are colony dwelling vegetarians whose burrows are usually located in coulees and on hillsides with rocky outcroppings, in central British Columbia and southern Alberta.

Yellow-bellied marmots in Canada are living at the edge of their normal range, so sightings are usually infrequent. Waterton Lakes is the only national park where they can be found (if you're lucky!)

The beaver is the largest rodent in Waterton. You will find the beaver hard at work in valley-bottom streams and ponds building lodges and dams out of sticks and mud. These wide-tailed, toothy fellows eat bark. Their favourite flavour? Aspen. Cottonwood trees and willows are also important foods.

Beavers play a very important role in the park ecosystem. Their ponds provide habitat for aquatic animals, waterfowl and amphibians, as well as flying bug eaters such as swallows and bats. They are also some of the most productive places for breeding birds. Meadows, created as beavers fell nearby trees, and old pond sites are used by small mammals and ungulates. A healthy population of beavers indicates good conditions for a large suite of other plants and wildlife. 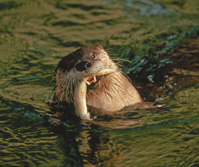 The recent appearance of river otters in the park is an exciting event in the park. Considered to be one of the rarest animals in the park, these playful animals had not been seen for many years. They live in larger streams and lakes, where they find their favourite food, fish.

Otters form tight-knit families, and will swim and play together. They particularly enjoy sliding down muddy or grassy banks into the water. They are active year round.

While bats are relatively scarce in the park, there is a good variety. The little brown bat, big brown bat, long-eared bat, long-legged bat and silver-haired bat are all found here. They mostly live in riparian (along streams) cottonwood forests and mature montane coniferous forests. Older forests tend to provide more places for bats to roost than younger woodlands.