A little more than 3 years ago, a prescribed fire was conducted in Pukaskwa's front country. What happens after the smoke settles over a patch of charred forest, when a fire has been extinguished, and three years have gone by? The prescribed fire site will look VERY different, that's for sure!

Most of the prescribed fires in Pukaskwa National Park are located in the remote backcountry, accessible only by helicopter. The 1-hectare Hattie Cove Prescribed Fire is special because it was in the front country—adjacent to the park kiosk, walking distance from the visitor centre and campground, and located at the beginning of the coastal hiking trail. This prescribed fire, completed in May 2012, was designed to reproduce the effect a natural fire would have on the Boreal/Great Lakes-St. Lawrence mixedwood ecosystem in an accessible location. The primary goal was to showcase how fire is used as a vegetation management tool to reverse the negative changes associated with historical fire exclusion.

Ecological objectives for the Hattie Cove Prescribed Fire included increasing fire-dependent seedling presence, decreasing the overstory canopy, and reducing the conifer understory. Observations immediately following the fire noted that nearly all of the above ground vegetation and down dead woody debris was consumed or killed by the fire, but that depth of burn was low with just the litter layer being consumed. It was also noted that overstory mortality was high among many of the spruce and white birch trees, that balsam fir trees were nearly eliminated from the site, and that many of the mature aspen trees seemed unaffected by the fire. Now, more than 3 years later, the Hattie Cove Prescribed Fire site looks very different! 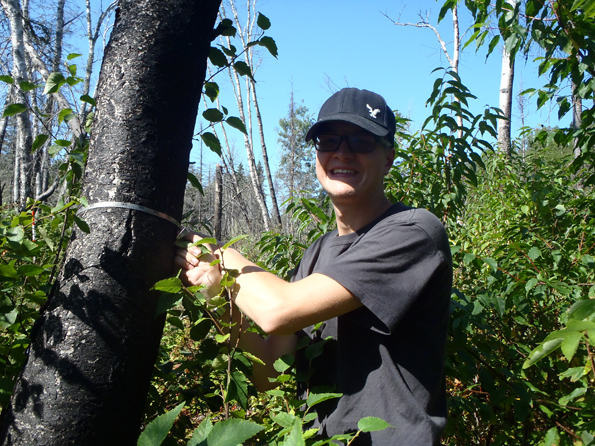 Observations in the post-burn years have continued telling the story of how fire affects and renews mixedwood stands over time. Environmental science students from Lakehead University, visiting Pukaskwa National Park as part of their fall field school, helped track these changes by completing vegetation monitoring plots. The students waded through thick regrowth, following the same sampling procedures used by park staff in pre- and post-burn site measurements; identifying seedling tree species, measuring soil organic layers, photographing any identifying features, and noting bird species present in each plot. Another component of the field school included insect collection and identification. The students collected insects from multiple sites inside and outside of the prescribed fire site—preliminary results from 2015 show the abundance of insects inside the burn is 10 times higher than outside the burn!

Visitors can do their part to help monitor the regeneration of the Hattie Cove Prescribed Fire site too. There is a citizen science photo-op station set up beside the Hattie Cove Fire Walk trail. This station instructs visitors to snap a photo from a camera-platform, and asks them to share it on social media with the tag #AliveandWell. As successive photos get posted and tagged, it will be possible to watch the forest vegetation grow and change over time. The accessible location of the Hattie Cove Prescribed Fire has displayed the post-burn forest regeneration in a way that isn’t normally possible and facilitated many great learning opportunities. 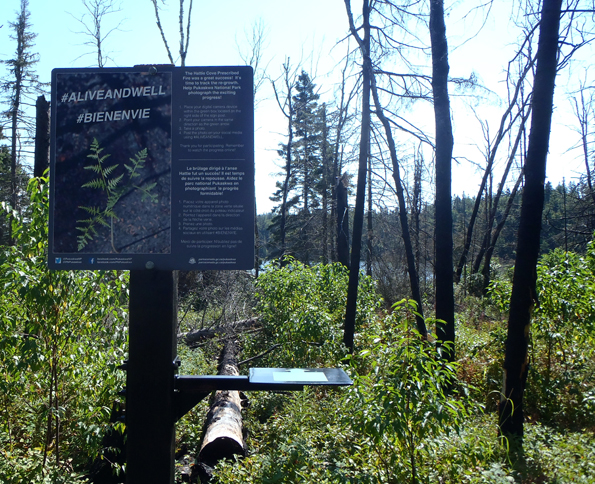 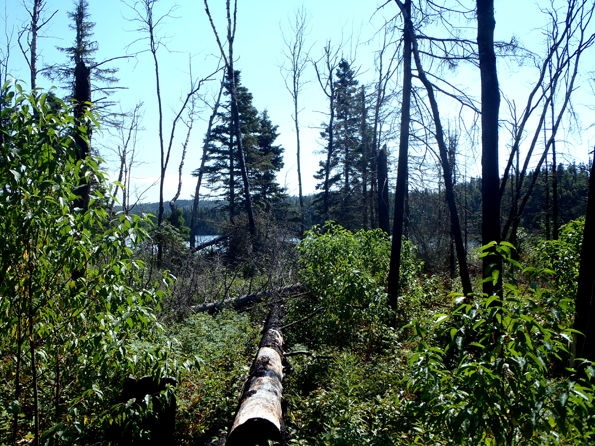