Permafrost refers to ground that remains below 0 °C for at least 2 consecutive years. Even though the most recent glacial period ended over 11,000 years ago, the climate of the Northwest Territories is harsh, with long winters and short summers. With an average temperature of below freezing over the year, the entire ground at the landmark is permanently frozen as permafrost, in a region of continuous permafrost.

Canadian climate normals at the Tuktoyaktuk A weather station

Permafrost varies in thickness throughout the Arctic, from a very thin layer at its southern limit to up to 600 metres thick in the High Arctic. The ground above the permafrost is called the active layer. The active layer thaws in the summer.

The Tuktoyaktuk Peninsula is one of the most dynamic landscapes in Canada. It has a permafrost layer up to 500 metres in depth with a much thinner active layer that thaws annually near the surface. This active layer is susceptible to erosion due to a warming climate and larger storm surges due to rising sea levels.

Our partners at Natural Resources Canada have been researching this area from the Tuktoyaktuk research station in a project titled Understand the Acceleration of Climate Driven Coastal Change in the Inuvialuit Settlement Region. The study area also encompasses Inuvik and Paulatuk, NT, and Komakuk, YT. 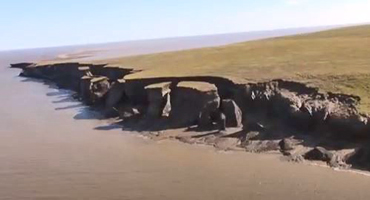 Video on changing coastlines in Canada

Links to more information on permafrost

Video on changing coastlines in Canada