The Western Arctic is home to about 1200 species of plants. At The Pingo Canadian Landmark, close to the ocean, permafrost is near the surface and prevents the growth of trees and many other plant species. However, low-growing vegetation including herbaceous plants, shrubs, mosses and lichens have evolved to live even in these harsh tundra conditions.

The landmark lies just north of the treeline and Taiga Plains, in the Southern Arctic Ecozone. North of the treeline, it is difficult for trees to survive due to the cool, short summers, the permanently frozen ground, the strong winter winds, and the lack of water in the desert-like Arctic environment. Trees living at the northern limits of growth become stunted into a form known as "krummholz" due to severe frost damage that can occur to trees taller than the typical winter snow depth.

Shrubs are woody perennial plants that are shorter than trees and have multiple stems. These low-lying plants are protected from frost and wind damage during the Arctic winter when insulated by snow cover. This is one of the reasons why riparian areas in the tundra have greater shrubification than more exposed areas. The Pingo Canadian Landmark is in an area of low-shrub tundra, dominated by low shrubs less than 40 cm tall.

You may see a variety of shrubs including prostrate dwarf shrubs that lay flat on the ground, such as Arctic willow (Salix arctica), and low-lying dwarf shrubs that have trailing stems growing close to the ground, such as white heather (Cassiope tetragona). You may also find other dwarf shrubs including blueberries (Vaccinium uliginosum) and Labrador tea (Ledum decumbens). There are also low shrubs such as dwarf birch (Betula glandulosa).

Graminoids including sedges (Carex sp.), rushes (Juncaceae sp.), and grasses (Poaceae sp.) are common in wetland complexes in the warmer areas of the Arctic. Horsetails (Equisetum sp.) and common mare’s tail (Hippuris vulgaris) grow along the shoreline throughout the delta. Cotton-grass (Eriophorum sp.) grows within the landmark and can often be seen in roadside ditches across the tundra. 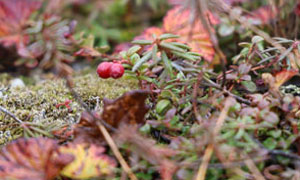 Berries are abundant in many places within the landmark. Cranberries (Vaccinium vitis-idaea) have pink flowers that develop into bright red, seedless berries by late August. The white flowers of cloud berries (Rubus chamaemorus) come out in June while the orange berries ripen in late July. Blueberries (Vaccinium uliginosum) are also found at the landmark. Visitors are not allowed to pick berries within PCL boundaries.

Sphagnum moss and leaf lichen are an important ground cover in the region. In the summertime, wildflowers bring colour to the tundra as daisies (Chrysanthemum arcticum), northern goldenrod (Solidago multiradiata), and paintbrush (Castilleja sp.) break into bloom. 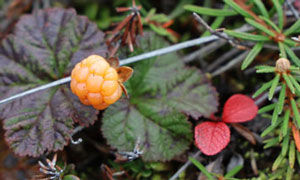 The study of the timing of plant life cycle events such as flowering, and how these events are influenced by climate and habitat, is known as plant phenology. Plant phenology is one of the ways the effects of climate change can be seen. Plants growing in the Arctic have adaptations that help them endure the short growing season. Plants must quickly emerge from their winter dormancy, so they resume photosynthesis in the springtime as soon as the snow melts. However, springtime arrives sooner than it did a decade ago for many species throughout the Arctic1.