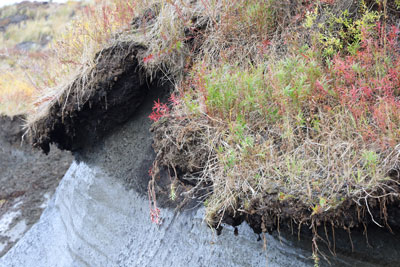 The Tuktoyaktuk Peninsula area is part of the large Beaufort-Mackenzie sedimentary basin. This basin was, and still is, a zone of sediment deposit for the Mackenzie River. The surficial material in this area is mainly fine to medium-grained sands deposited during the Pleistocene Epoch, approximately 600 000 years ago. The sand layer averages more than 30 metres in thickness throughout the Tuktoyaktuk area. The sand layer in the Tuktoyaktuk region is capped at the surface by a layer of fine-textured clay and silt which ranges between 1.2 to 7 metres in thickness.

The soils that cover the sand and stony clay layer in the landmark can be generally characterized as being very shallow, very wet, and deficient in nutrients. The soil forming process in cold Arctic regions is very slow and true soil development is usually limited to a thin organic-rich mat at the surface.