Observe and sail without disturbing

This code of ethics proposes a whole set of behaviours that take into account the existing regulations, seabird ecology, and the regional reality in order to harmonize seabird observation in the Mingan Archipelago.
The objectives of the code of ethics are to limit the risk of seabird disturbance related with the observation and boating in the Mingan Archipelago, as well as to promote appropriate behaviours for the preservation of seabird populations. 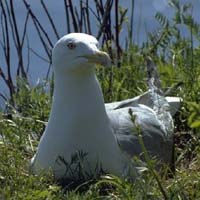 Although the seabird populations of the Mingan Archipelago are in good health, they are still exposed to several threats, such as poaching, oil spills, etc. The disturbance of seabird colonies from bird watching and boating activities represents an additional stress on which we can all act.
According to their nature, bird watching and boating activities can disturb seabirds on their breeding, rearing, and feeding grounds. This type of disturbance can have, in all likelihood, adverse effects on their survival.
The direct impacts of human disturbances can be detected by the observer and are often seen through alarm calls, panic responses, flight, or sometimes by the temporary desertion of the colony.
Although less apparent, the indirect consequences can manifest themselves through nest and chick abandonment, predation on the eggs and chicks, bird exhaustion, and can ultimately lead to site abandonment and decline in the population.
The studies completed in the Mingan Archipelago have shown that the disturbance of Common Eider crèches (a group of ducklings accompanied by females) by boats often leads to predation on ducklings by gulls. Observations made on the Atlantic Puffin show that disturbances from several boats near colonies result in their prolonged desertation.

To limit the risk of disturbing seabirds, the following behaviours are recommanded.

On Waters Within 200 meters of a Colony

The National Parks Act and the Wildlife Regulations prohibit hunting, disturbing, and the destruction of the bird fauna and their nests inside the Mingan Archipelago National Park Reserve. Furthermore, certain islands or island sectors are closed off to the public from May 1 to August 31 to ensure the reproduction success of seabirds (see the principal regulations ).
The Migratory Birds Convention Act applies to Canada and the United States. It prohibits, unless you have a permit and respect all of the conditions stated, to pursue or harass migratory birds. In Betchouane and Watshishou sanctuaries, it is also prohibited to practice activities harmful to birds.

You can play a crucial role in the conservation and development of seabirds in the Mingan region. To do so, observe the code of ethics, inform other navigators, and respect the existing regulation.