Three human figures wearing high hats are often carved at the very top of Haida poles. In the past, Haida watchmen were posted at strategic positions around a village to raise the alarm in advance of an approaching enemy. 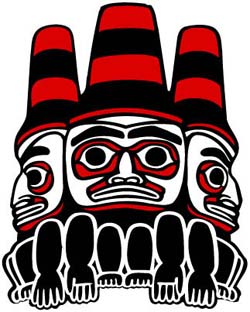 The carved figures crowning the monumental poles stood sentinal over the village. The three carved watchmen form the symbol adopted by the Haida for the Haida Gwaii Watchmen Program.

Today the Haida Gwaii Watchmen have their own management structure and they are funded by Parks Canada.

From May to October the program has provided seasonal employment for Haida men and women as young as 16 and as old as 78. For many visitors, meeting the watchmen is their favourite part of a memorable trip to Haida village sites.

They offer a first-hand introduction to Haida culture by sharing their knowledge of the land and sea, their stories, songs, dances and traditional foods.