In 1796, three ships brought approximately 600 Maroons — men, women, and children — to Halifax from Jamaica, where they had fought for independence from Britain. To solve what the British saw as a security problem in Jamaica, the Maroons were transported against their will to Nova Scotia.

Although they stayed only four years, the Maroons left an enduring legacy in Nova Scotia. Maroon men worked on the defences of the third Citadel, for which it is believed a part of the fortifications was called ‘Maroon Bastion’ in their honour. They helped erect Government House, were part of a militia unit, cleared woods for roads, and were employed as general labourers.

Among other tasks, the women and children gathered fruits and berries, and grew vegetables for sale at the Halifax market.

The Maroons impressed Prince Edward when they arrived, particularly their military heritage.

At first the Maroons lived in tents and barracks on the Citadel’s grounds, and in barns on Governor John Wentworth’s property. They received land in the Preston area that had been vacated by Black Loyalists in 1792.

However, they were not pleased with the quality of the land they received, the northern climate, or attempts to convert them to Christianity. In August 1800, most of the Maroons chose, like many Black Loyalists had before them, to immigrate to the free black colony of Sierra Leone in West Africa. They were not permitted to return to Jamaica.

A few Maroons, like Sarah Colley, remained in Nova Scotia. 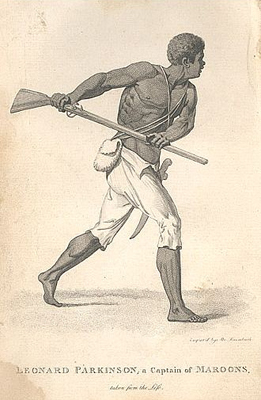 The Maroons were descendants of escaped African slaves who the Spanish and later British brought over for their sugar plantations in the 16th and 17th centuries.

They formed independent communities, often in the mountain regions, and in the 18th century fought several “Maroon Wars” against British colonial authorities in Jamaica.

Maroon leader Captain Cudjoe signed the treaty with the British in 1739 which ended the first “Maroon War”.