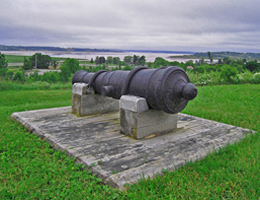 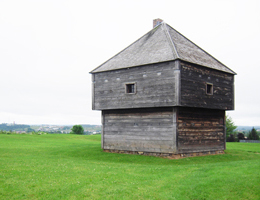 © Parks Canada/T. Bunbury
Here on this hilltop once stood soldiers’ barracks, storehouses, a kitchen and a brewery. At its peak, Fort Edward served as a small, but busy military hub. Today, the blockhouse and cannon remain as reminders of the fort’s important role in securing British rule in the 1750s, while Britain and France battled for control of North America.
History
Blockhouse architecture
Fort Edward archaeology

Fort Edward was constructed in June 1750 to secure the overland route between Annapolis Royal, the old capital of Nova Scotia, and the new capital at Halifax, founded in 1749. The British colonial officials also intended the fort to assert government authority in the Piziquid area, one of the centres of Acadian settlement in the province. As well, Mi'kmaq frequently travelled through the area following the two rivers (the Avon and the St. Croix) that met below the hill on which the fort was constructed.

In the autumn of 1755, Fort Edward served as a centre for the deportation of approximately 1200 Acadian men, women and children from the villages of Pisiquid. Some Acadians however evaded the deportation and small groups were detained at the fort over the next few years.

During the American Revolution, the fort was repaired and garrisoned to protect the area, now called Windsor, from attack by American raiders. One of the captains of the British regiment occupying the fort was Allan Macdonald, husband of Flora Macdonald, who had won fame as the rescuer of Bonnie Prince Charlie following the defeat of his Highland forces at the Battle of Culloden in 1745. Flora spent the winter of 1778-79 at Fort Edward before she returned to Scotland.

when war broke out between Britain and the United States in 1812, military officials feared an attack on the Windsor area. Fort Edward was hastily repaired and manned. Despite this brief revival, Fort Edward had ceased to have strategic importance in the defence of Nova Scotia decades before. The fortifications gradually fell into disrepair but the grounds were used by the local militia for training as well as for the site of the Windsor Agricultural Fair. During the First World War, the fort grounds also served as a camp for troops from the Annapolis Valley waiting to go overseas.

An Exact Plan of Fort Edward at Pesaquid, 1757 (William Clements Library, Ann Arbor, Michigan), shows that the defences included a blockhouse, barracks for soldiers and officers, provisions stores, a powder magazine and service buildings, protected by earth ramparts, a wooden palisade and a ditch. Outside the ramparts, on the hillside, were small gradens, stables for cattle and horses, a hospital, a forge and huts for some of the soldiers. There was also a truckhouse, a government-sanctioned trading post set up to facilitate trade with the Mi'kmaq. Only the blockhouse survives: the oldest standing blockhouse of the 200 that were built in Canada and the oldest surviving in North America.