The role of fire

Fire creates the conditions that allow the regeneration of a variety of plant species. Over time, periodic fires create a vegetation mosaic of different ages and types. This provides a rich variety of habitats that supports many species of insects, mammals and birds. This is biodiversity — it indicates a thriving ecosystem that is likely to persist in the future. Of special note, fire is essential for a species in decline in the park. After years of logging and fire suppression, less than 1% of La Mauricie National Park’s forest is now dominated by the eastern white pine. The present situation is a far cry from the one described by explorers and loggers in the centuries prior to our own.

So fire not only renews and recycles, but rearranges ecosystems in a continual cycle of change. 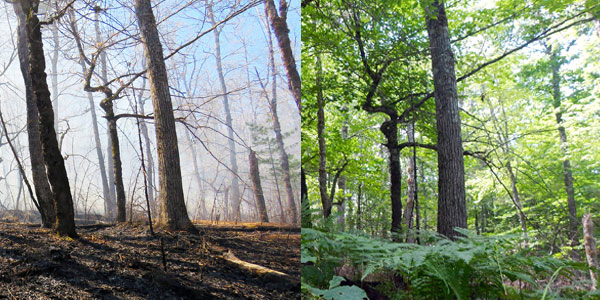 Fires burn with variable intensities and severity across the landscape due to changes in weather, terrain, wind and other factors. Areas where the forest is completely consumed by fire are interspersed by patches of unburned and lightly burned forest. In this way fire increases the diversity of the ecosystem over time.

Fire is as crucial to forest renewal as the sun and rain. Forest fires release valuable nutrients stored in the litter on the forest floor. They open the forest canopy to sunlight, which stimulates new growth. . 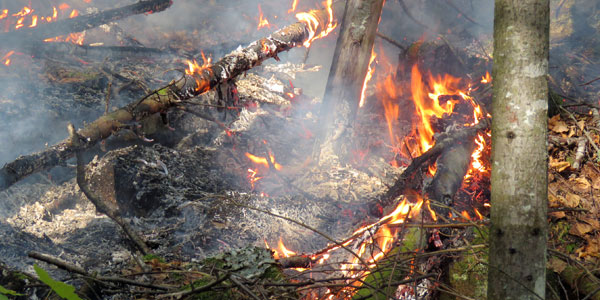 In cool temperate areas such as La Mauricie National Park, decay is slow and logs, leaves and needles pile up on the forest floor. Fire reduces this material to mineral-rich ash, releasing and recycling nutrients. Fire also creates openings in the forest. Sunlight penetrates these gaps, warming the soil and stimulating new growth from seeds and roots.

Occasional fires also reduce the amount of accumulated fuel on the forest floor (woody debris, dead trees and leaves). This reduces the potential for extremely large, hot fires, which can result in increased erosion, and loss of soil fertility. 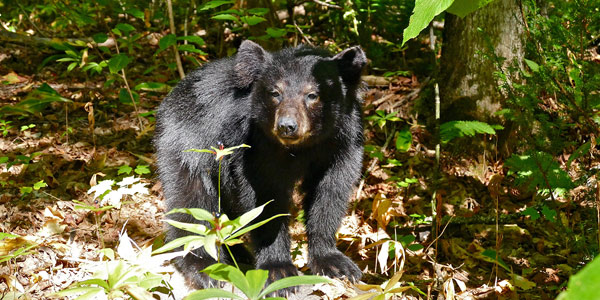 During a forest fire, animals that are able to, will flee, while others such as snakes, turtles and salamanders may simply burrow in the ground or under rocks to protect themselves. In fact, forest fires may actually help increase the abundance of certain wildlife.

Fire increases the abundance of shrubs and grasses that herbivores such as moose feed on. Fire also results in increased availability of berries that form an important part of the diet of black bears. After a fire, woodpecker populations may increase fifty times! They come to feast on the insects that colonize the newly burned trees. Even the Canada lynx benefits from fires by using mature conifers for cover and hunts in recently burned areas that support large populations of its favorite prey – the snowshoe hare.