Turning the scope on the birders--volunteers Joel Cooper and Carol Dersch have been contributing to peregrine falcon monitoring in Pukaskwa National Park for 15 years! 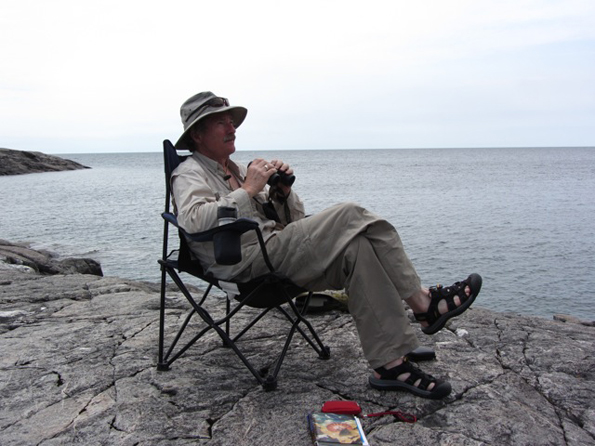 The waves lap softly against the bedrock peninsula on which Joel Cooper has placed his fold-out chair. For the past two hours he has been waiting patiently, looking 30 meters up and across from where he sits, at a nest that a peregrine falcon used to raise its young the previous year. He is at the southern tip of Pukaskwa National Park, just outside the park boundary near the Pukaskwa River, about 100 km in any direction from civilization.

Each spring since 1993, he and his wife Carol Dersch, have searched many cliffs along Lake Superior’s coast for nesting peregrine falcons. The first nest they found was in Gargantua Harbour, in Lake Superior Provincial Park, and they’ve been searching ever since.

“It’s been an excuse to travel the coastline”, says Joel. They first made the 220 km round trip into Pukaskwa from their home in Michipicoten Harbour in 2000. “We often do the trip to Otter Island and back as a day trip. In our travels we rarely see another boat. If we see a boat it is a commercial fishing boat, usually between Michipicoten Island and the mainland. We sometimes see a kayak or a canoe or a cruising boat (sail or power) but not very often”. 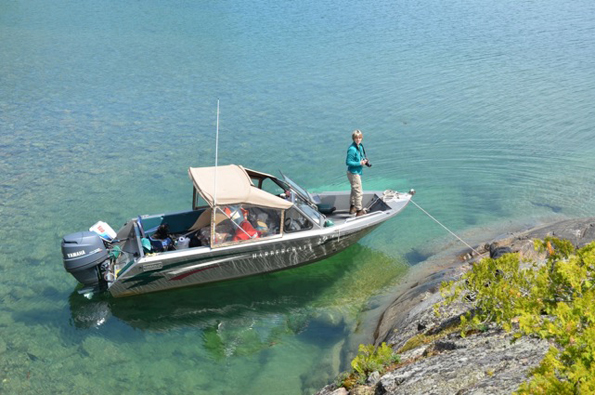 Over the years the trips haven’t always gone exactly as planned. A few years ago, after Joel had dropped Carol off on a rock near Richardson’s Island in Bonamie Cove so she could get a better vantage of a nest, he accidentally hit a shoal and damaged his motor. Being so far from help, this could have been a serious situation. “Always being prepared gives you options”, Joel explains. And prepared he certainly was. With a marine radio, SPOT device, camping gear, extra food and--importantly--an extra propeller for his motor, Joel was able to pull his boat to a safe location, change the prop, and still make it home in time for dinner that night.

On this day, the cliffs of Pukaskwa are steeped in fog, a familiar sight. Joel and Carol aren’t letting the fog that has soaked the air for nearly the entire month falter their determination. They wait patiently and are rewarded with a sighting of an adult peregrine and then a second which joins the first on the same cliff, confirming a breeding pair for this location. With that confirmed sighting, they hop back into their boat to begin the journey home with another successful season of monitoring peregrine falcons accomplished. Are you also interested in participating in peregrine falcon monitoring in Pukaskwa National Park? Contact Christine Drake, Park Ecologist, for more information.