The motivation behind the program was to offer students invaluable hands-on experience in data collection, to really maximize their learning and experience. Judging from the abundant positive feedback, it was a huge success!

Students hiked to the White River and camped in the park’s backcountry. "Loved the course,” one student said. “It was physically and sometimes mentally exhausting, but easily the most rewarding class I have taken. The hands-on field skills we learned will transfer into a number of different fields, and it gives us a broader understanding of all the different factors affecting ecosystem health from an interdisciplinary viewpoint." 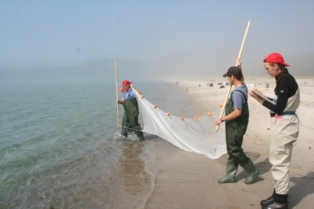 One benefit of the field school was a greater understanding of the effects of prescribed burning on regeneration dynamics, of soil organic matter storage and soil invertebrates through post-burn monitoring. Pukaskwa National Park performed a one-hectare demonstration prescribed burn in its front country in 2012. The main purpose of the burn was to encourage the regeneration of fire-dependent boreal plants in a site accessible to visitors. As a result of this burn, there will be excellent opportunities from year to year to learn about succession from an early stage ecosystem through to a mature forest.

The activities in which the students were engaged are all consistent with Pukaskwa National Park’s ongoing ecological integrity monitoring program. In addition to the fire vegetation monitoring, students also helped the park with a restoration project for a rare plant. The world’s most northerly population of Pitcher’s Thistle (a species at risk) is on Lake Superior in Pukaskwa National Park. Lakehead students cleaned, counted, and planted Pitcher’s Thistle seeds at Oiseau Bay. A great deal of care was taken to ensure minimal impact to existing plants from which seeds were collected. With these efforts, Parks Canada is hopeful that one Pitcher’s Thistle colony that disappeared more than a decade ago will be re-established, and another population that has been in decline for the last several years will be maintained. The park will continue to monitor its Pitcher’s Thistle populations until they hopefully recover and are once again self-sustaining.

Students also did fish and vegetation sampling. “At the time we went (to Oiseau Bay), the fog had lifted and we were able to see the rugged coastline and really get to see a part of the park that a lot of people don’t get to see.”

The field school was a positive experience all around. "Absolutely everything we did was so useful. As someone entering the job market after next year, I will be referencing these two weeks more than anything else. I loved the variety. I'm so happy I took this course."