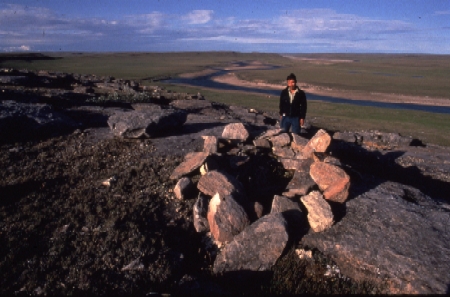 Evidence of Tuktut Nogait's rich cultural history is widespread. Indeed, recent surveys have identified over 360 archaeological sites in the park. Visitors have a good chance of encountering some of these sites, especially when travelling along the river corridors. Tent rings, caches, rock alignments, meat drying areas and hunting blinds can all be observed.

Humans have occupied Tuktut Nogait since 1000 AD. The oldest known archaeological sites in the park are most likely Thule or Copper Inuit occupations, while the more recent sites are Inuvialuit and possibly early trappers/traders. No Dorset or Dene sites have been found to date. 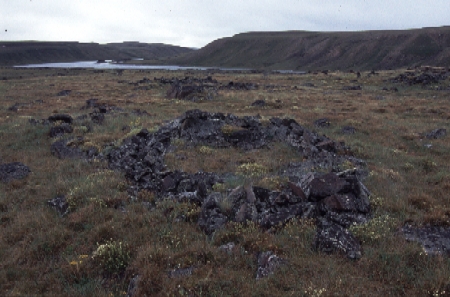 Much of the evidence of past human use of the areas surrounding Tuktut Nogait, was gathered along the coast, north of the park. Most of these coastal sites are of the Thule and Copper origin and reveal several centuries of occupation (AD 1200 to 1500). Researchers believe these peoples occupied coastal sites in winter, and inland fishing sites in the fall.

Thule culture has several distinctive characteristics, including the specialized development of whaling technology, and the use of dogs for transportation. Copper Inuit appear to have descended from the earlier Thule peoples, but the use of copper and a change to land-based hunting and fishing have given rise to the Copper Inuit's distinctive name. Today descendants of the Copper Inuit call themselves Inuinnait.

Until further research is conducted, it remains unclear why the Thule and Copper sites were abandoned and what became of these two cultures that left their mark on the land. The final abandonment of the southern shore of Amundsen Gulf occurred in the 19th century, and is attributed to European contact.

In more recent times, Inuvialuit have used parts of the area for hunting, trapping and fishing, mainly along the coast and rivers. The Inuvialuit are descendants of two cultures. The Mackenzie Delta Inuit are Thule in origin, and occupied a region from the Yukon to as far east as Amundsen Gulf. Many Inuvialuit also trace their ancestry to the Inupiat cultures of Alaska, whose ancestors immigrated to the region in the late 1800s and early 1900s.

Beginning in the mid 18th century, the Coppermine and Mackenzie Rivers channeled early travelers around the inland areas presently encompassed by the park. It was thus not until the mid 18th century that the park area was finally reached by outsiders. Father Emile Petitot was the first European to reach the area in 1867-68. From approximately 1890 to 1910, a large number of whalers operated in the Western Arctic, however they rarely ventured inland for exploration purposes. Between 1898 and 1912 two more explorers penetrated the area. In 1898, A. J. Stone traveled the area east of Cape Lyon in search of muskox and between 1908 and 1912, the Canadian explorer Vilhjalmur Stefansson traveled along the Amundsen Gulf coast during his exploration of the area between the Mackenzie Delta and Coronation Gulf. White fox trappers followed in the wake of explorers and whalers, but the extent of their activities, if any, in the park is not known. Nevertheless, the arrival of the early trappers in the region resulted in more permanent interactions between the European and Inuvialuit cultures.

In 1930, the Hudson's Bay Company established an outpost at Letty Harbour, attracting the Inuvialuit population of the area to the post to trade. The post was closed in 1937 due to insufficient trade. In 1935, a Roman Catholic Mission was located at Paulatuk, in part because of the nearby source of coal along the Hornaday River and the proximity of a good harbour. From 1936 to 1954 the Mission operated a small trading post and thus served as a religious, social and economic centre. The Inuit who came to Paulatuk and the Darnley Bay area were primarily Mackenzie and Alaskan Inuit from the west. In 1955, most people abandoned the Paulatuk mission and moved to Cape Parry where a Distant Early Warning (DEW) line site was being built. The construction of the DEW line site created permanent wage labour positions as well as seasonal construction work. Following the closing of the trading post in Paulatuk, and following a request by the Federal Government, the small trading post at Letty Harbour was re-opened to attend to the trading needs of the Paulatuk Inuit.

The modern period in the Inuvialuit Settlement Region and in the Paulatuk area is characterized by the settlement of people in the six communities of the Region, and by a shift from the subsistence economy to an economy based both on wages and on traditional activities. This shift continues to this day. In the mid 1960's, people in the Darnley Bay area moved back to Paulatuk. It is also in this period that the Government began to build houses in Paulatuk, and later a school, health facilities and other modern conveniences. Today, there are 3,500 Inuvialuit living in the six communities of the Inuvialuit Settlement Region.

While relying on the wage economy, many people in Paulatuk still derive much of their sustenance from the land. Most of the active hunters do not, however, make use of the park. Those who currently hunt, fish, and trap, do so primarily northwest of the community, towards the Parry Peninsula, and south and southwest, in the direction of Tsoko Lake and the Horton River. Commercial sport hunts also take place in these areas and north of the community, on the sea ice. The only current activities taking place in the park - in the north-western part of Tuktut Nogait - are fishing (primarily for arctic char), hunting (for caribou), and some trapping.

For centuries, subsistence use of wildlife has been an integral part of the functioning ecosystem in Tuktut Nogait. Not only is subsistence harvesting an intrinsic part of a functioning ecosystem, but it also ensures that local residents can carry on their connection with the land and appreciate the value of a national park in protecting the land's resources.

As is outlined in the Inuvialuit Final Agreement and the Tuktut Nogait Agreement, Inuvialuit beneficiaries have the right to pursue subsistence harvesting within the park. Commercial or sport hunting activities are not permitted in Tuktut Nogait.