The Mountain National Parks are a mountaineer’s smorgasbord with hundreds of peaks and countless routes ranging from straightforward glacier walks to never-repeated Grade VI alpine test pieces. New routes are put up nearly every season. These mountains are your oyster, but their challenges are not to be taken lightly. The rock in Selkirk Mountains of Glacier National Park is relatively solid and enjoyable to climb. Meanwhile, it has been said if you can climb in the Canadian Rockies, you can climb anywhere. Your first few encounters with some of the range’s notorious “removable holds” will likely help you decide where your level for risk tolerance lies. It is highly recommended that you spend some time on some of the Rockies’ classic traditional rock routes such as those on Mount Yamnuska east of Banff before attempting any of the range’s more remote and challenging alpine routes. 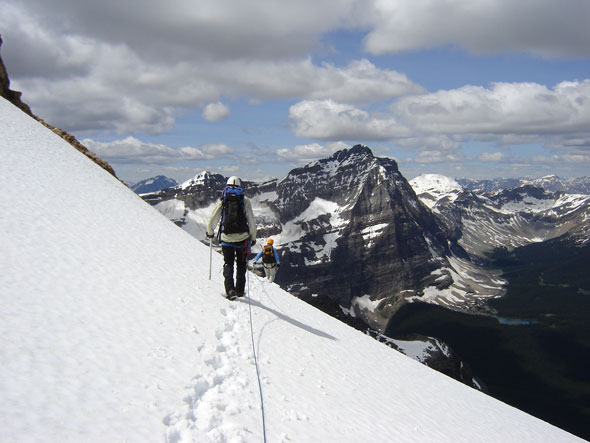 Climbers visiting the Mountain National Parks for the first time may not be familiar with the type of climbing and the varying rock quality in particular. The Canadian Rockies are made up almost entirely of sedimentary rock including limestones and dolomites, shales and silicas (including quartzite). The characteristics vary widely from the very worst (we’re not joking) to some fine rock, depending on the formations (the layers) encountered. The best rock climbing is found on the some of the thickly bedded limestones (such as the lower cliffs of Mount Rundle in Banff National Park) and dolomites (Castle Mountain in Banff National Park), and the beautiful quartzites located along the main continental divide ranges (such as the Selkirk Mountains of Rogers Pass in Glacier National Park.

In the Selkirks of Glacier National Park, the deep winter snowpack usually lingers until June, and the snow slopes and glaciers above 2000 metres (6560 feet) are not usually firm enough to facilitate easy travel until early July. By late September, snow is likely to be found on the high peaks. In the Rockies, alpine peaks of 2750 metres (9000 feet) and higher only begin to come into reasonable summer condition in late June and early July as the spring avalanches taper off. This includes all the high peaks in the Lake Louise area and north along the Icefields Parkway. The window for difficult alpine climbs is very limited. The north faces are usually only dry for several weeks in August, however the season for alpine ice climbs on steep ice faces and gullies extends into the cooler temperatures of September or even early October.

Alpine climbs inevitably involve climbing through multiple formations and highly variable rock some of which is extremely loose, as evidenced by the huge talus and scree slopes around the bases of most peaks. Most routes do involve at least some climbing on loose rock and for climbers not accustomed to this, this can slow progress down considerably. In addition, route finding can be difficult as routes are often convoluted and indeed, route finding is often the key to successful execution of a route. Consequently, it is sound advice to approach difficulty, length, grades and time estimates conservatively. 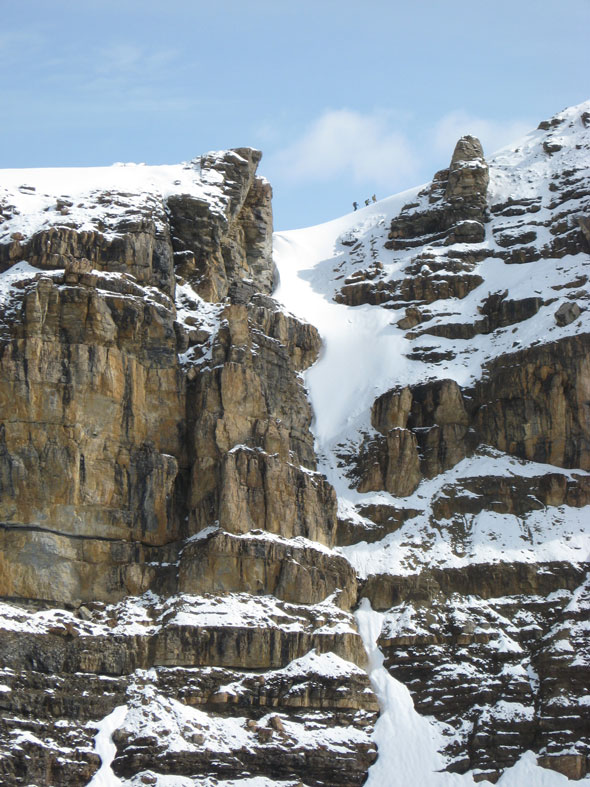 The Columbia Icefields area is located along the Icefields Parkway at the northern boundary of Banff National Park. This spectacular glaciated plateau, which is shared with Jasper National Park, is ringed by many of the highest mountains in the Canadians Rockies and is truly an Arctic environment. Ski touring is the only reasonable way to access some of the more remote peaks across the Icefields. The Wapta Icefields is another glaciated plateau which stretches for 30 kilometres along the Continental Divide north of Lake Louise and is a very popular spring ski touring destination serviced by several Alpine Club of Canada huts. Knowledge of glacier travel and navigation skills are necessary for both these areas. Glacier ice on steep slopes or cliff edges can collapse at any time. Be extra cautious about walking on or beneath overhanging ice or snow.

Remember, you are your own safety monitor