Between 1885 and 1911, more than 250 men lost their lives in avalanches in the Rogers Pass area of Glacier National Park. The worst accident happened during the night of March 4, 1910, when a crew of 58 men who were shovelling snow from the tracks of the Canadian Pacific Railway – the result of an earlier avalanche on Cheops Mountain on the opposite side of the valley – were buried by a large avalanche that came thundering down the steep slopes of aptly named Avalanche Mountain. All but one of the men perished. Soon afterward construction began on a series of snow sheds designed to protect the railway. In 1916 the Connaught Tunnel was completed, permanently protecting the railway and its workers from the most dangerous section of the pass.

While even today’s best avalanche knowledge is incomplete, the science of understanding how avalanches happen, and the skill of forecasting when they are most likely to happen has come a long way over the past century. The science of avalanche hazard evaluation - or avalanche forecasting - is carried out by trained professionals who diligently and persistently monitor the snowpack over the course of each winter season. While no one yet has figured out how to absolutely determine the stability of any given slope, Avalanche Forecasters observe and evaluate the myriad of clues provided by Mother Nature. With every flurry or big dump of snow, every windy, cloudy or bluebird day, the snowpack changes as it reacts to factors that include precipitation, temperature, humidity, cloud cover, wind speed and direction, and underlying terrain. 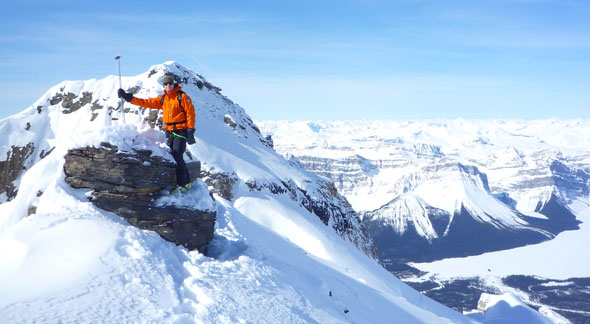 Maintaining a high level of climbing and skiing skills is part of a Mountain Safety Specialists job.

The most commonly used tool for evaluating snowpack conditions is accomplished by digging a snow profile. A skier would chose a slope similar in pitch and aspect to the one he wants to lay tracks down, while a researcher investigates different slopes of different angles and aspects from one day to the next. Digging a snow profile involves shovelling out a pit of snow with smooth sided walls, which reveal the snowpack’s many layers as they have accumulated through the season with each snowfall. Examining the size, shape and consistency of the snowflakes that make up those layers provides information about how well – or how poorly – those layers have bonded to one another. 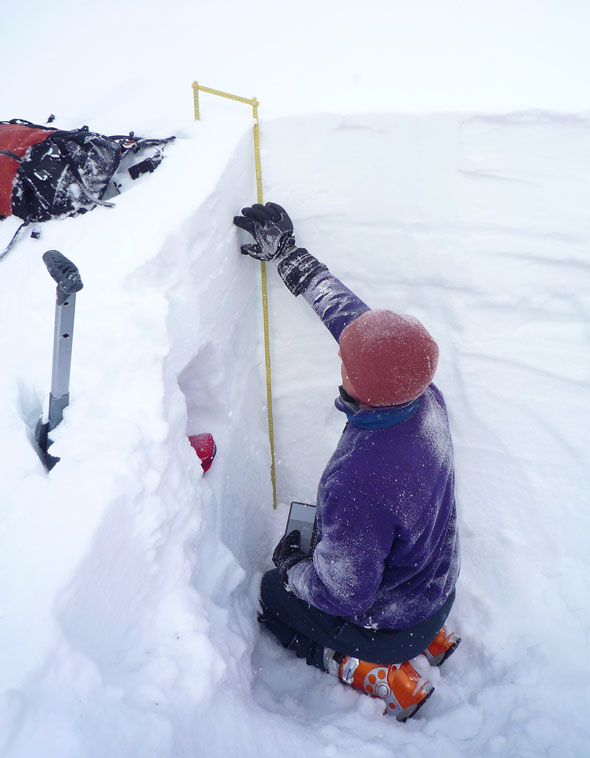 Parks Canada's Avalanche Forecasters are in the field everyday through the winter season studying the snowpack.

In the Mountain National Parks, Mountain Safety Programs Specialists are out in the field just about every day of the winter, digging pits, conducting snow profiles and compiling Public Avalanche Forecasts. Those bulletins describe the current conditions and provide a forecast predicting how the snowpack will likely react to the changes in weather, temperature and wind that are expected to occur over the upcoming few days. Very often, due to long periods of cold temperatures and little snowfall, the snowpack in the Rocky Mountains tends to be shallow and not particularly well-bonded. The snowpack in the Selkirk Mountains of Glacier and Mount Revelstoke National Parks is usually deeper and more consistent as a result of milder, more consistent temperatures and more frequent snowfalls. Still, even with the most advanced science, avalanche forecasting is often as much art as it is science.