The backcountry of the Mountain National Parks comprise a wide variety of terrain ranging from broad, well travelled valley bottom trails to steep alpine slopes and vast, complicated glaciers that can provide a fantastic playground for mountaineers, backcountry skiers and ice climbers of all experience levels. Avalanches are the most significant threat to the safety of anyone recreating in the uncontrolled mountain backcountry during the winter months. Snow avalanches happen when a combination of factors, including the amount of snow accumulated on a slope, the steepness of the slope, and the changes to the snowpack caused by wind, sun, temperature and precipitation, cause the bond within the snowpack or between the snowpack and the ground to weaken to the point that the snowpack can no longer hold itself together. 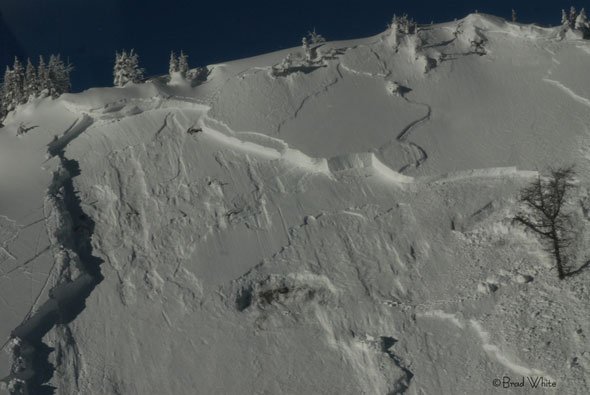 On the highways and secondary roads that pass through the Mountain National Parks, drivers should avoid stopping in posted avalanche zones. In the backcountry, your safety is your personal responsibility. While many hazards - including avalanches - exist, the risk of personal injury you face can be minimized by taking reasonable precautions. Caution and self-reliance are essential, along with a knowledge of natural hazards, experience in avoiding them and successfully dealing with them when they happen. Pick trips that reflect your level of ability. Ask park staff at any of the Mountain National Park Visitor Information Centres if you are unsure.

Avalanches can happen on slopes as shallow as 15 degrees. An avalanche does not have to be large to injure or kill a person. Even a small avalanche can shove a skier or an ice climber over a cliff or into a crevasse on a glacier. Avalanches can be powerful, fast-moving and extremely dangerous, and the snow can settle quickly into a cement-like state. In terrain such as a narrow gully, even a small avalanche can bury a person too deep to be dug out alive before they suffocate or die from injuries. Avalanches can be triggered naturally as the weather and snow conditions change, or they can be triggered by a person, animal or vehicle, such as a snowmobile, travelling through the terrain.

There are two basic types of avalanches: loose snow avalanches, which originate from a single point and which gather more snow as they descend a slope; and slab avalanches, which occur when a large area of cohesive snow begins to slide all at once down a mountainside. While avalanches happen mostly in the winter, snow can remain and can accumulate in the Mountain Parks any month of the year, which means avalanches can happen any time of the year too.

It’s not just about the gear

On average, eleven people die in snow avalanches every year in Canada. The majority of avalanche victims trigger the avalanche that injures of kills them. Although backcountry travellers should never leave home without them, avalanches don’t care if you’re wearing the latest, most technologically advanced transceiver on the market, or carrying the lightest, strongest shovel and probe known to gear junkies. Avalanches also don’t care how long it might take a trained team of rescue experts to reach you, or whether you happen to be in a place where your cell phone has reception or does not. 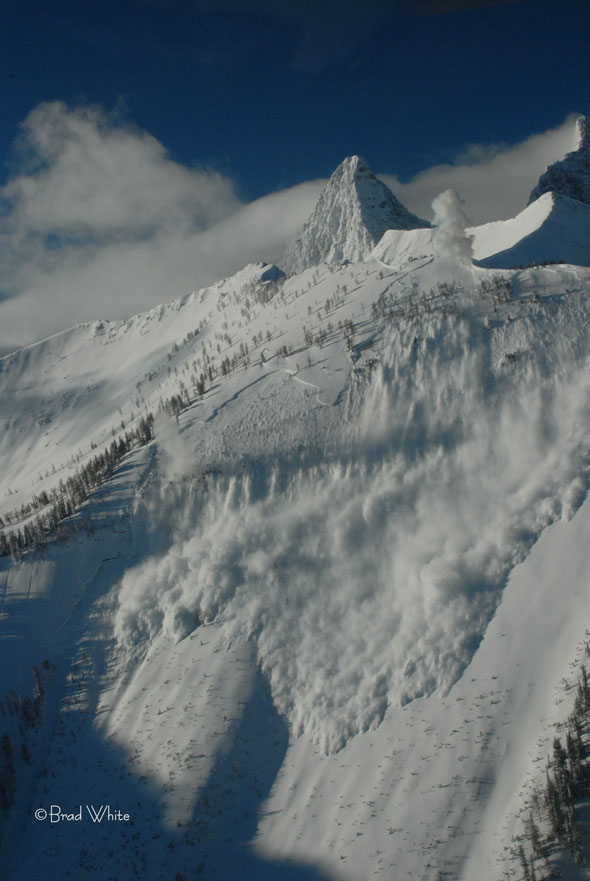 Avalanches are an ever present reality in the Mountain National Parks.
© Parks Canada / Brad White

Due to the vast size and nature of the wilderness terrain within the Mountain National Parks, anyone choosing to travel in avalanche terrain must be prepared and properly equipped to perform self rescue. While Parks Canada’s Mountain Safety Specialists are world-class highly trained professionals capable of carrying out Search and Rescue missions at the highest international standards, it is rare that they can arrive at the scene of an avalanche within the very short time frame a victim is likely to survive being buried. After the first 30 minutes, the chance of survival for anyone buried by an avalanche drops to 50 per cent, and continues to decrease with every passing minute.

Avalanche bulletins are compiled by Avalanche Forecasters based on data they collect in the field on a daily basis. The bulletins provide current and forecasted danger ratings for alpine, treeline and below terrain within a defined geographical region which extends two days beyond the day the bulletin is issued. The bulletins also provide information on recorded minimum and maximum temperature readings, precipitation, snowfall amounts, snowpack depth, and wind speed and direction for a 24-hour period, all of which are recorded at established study sites. Additional information includes a synopsis which communicates a general overview of the region’s avalanche conditions, a report of recently observed avalanche activity, and an outlook of how the snowpack is likely to react to current and forecasted weather activity. General travel conditions for people venturing into the backcountry are also described.

Know before you go

Public Avalanche Forecasts are provided so that park visitors planning trips into the backcountry for one or more days will use that information to help them make the most appropriate destination and terrain decisions. Backcountry travellers must be aware that while the forecasts strive for accuracy, backcountry conditions change regularly and can never be predicted with absolute certainty. Visitors should also know that forecast regions within the Mountain Parks are relatively large, and anomalies are possible in smaller areas within those regions that experience unique conditions.

Visitors to the Mountain Parks who plan to travel in avalanche terrain in the backcountry should check the Public Avalanche Forecasts on a regular basis in the weeks and days prior to their trip(s) to gain information about avalanche conditions as they evolve throughout the season. The avalanche forecast pages for each of the Mountain Parks provide access to archived bulletins for the current season.

Anyone thinking about travelling in avalanche terrain should first take a basic avalanche awareness and safety course taught by a certified Avalanche Skills Training course instructor. Following curriculum designed by the Avalanche Canada, through both classroom and outdoor field sessions AST Level 1 and Level 2 courses provide instruction on how to identify avalanche terrain, understand the conditions and factors that cause avalanches, how to plan and carry out a backcountry trip, understand and use Public Avalanche Forecasts and the Avalanche Terrain Exposure Scale, carry out a companion rescue and use appropriate travel techniques when travelling in avalanche terrain.