Bears in the mountain national parks

The Bryant Creek area is one of three “core areas” for grizzly bears in Banff National Park. These core areas contain critical bear habitat, and a concentration of female grizzlies live and raise their cubs here. Hikers have surprised bears here in late summer and have been seriously injured. Group Access legally requires people to travel in a tight group of four or more.

Does not apply to Br17 campground which is outside of the restricted area and remains accessible.

Applies to the Allenby Pass area:

Note: Visitors will still be able to hike to and from Assiniboine Lodge during restricted access via the lower-route trail to Assiniboine Pass or Wonder Pass.

Those who do not comply will be charged under the National Parks Regulations; maximum fine $25 000. 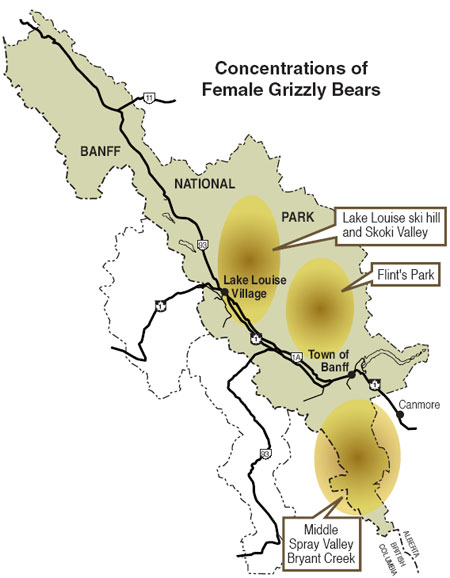 Over an eight-year period (1998 - 2005), five bear attacks occurred in two locations in Banff National Park—Allenby Pass near Bryant Creek, and on the Aylmer Pass trail near Lake Minnewanka. Both locations are in or near a “core area” and contain seasonally important grizzly bear habitat. The key attraction is an abundance of an important food source for grizzlies: buffaloberries. All of the bear attacks resulted from hikers travelling alone or in a small group who surprised female grizzlies with cubs along these trails during berry season.

Measures are in place to proactively manage visitor access to smaller selected areas where the attacks have occurred, to both protect visitors and minimize disturbance to bears feeding on berries.

Buffaloberries and grouseberries are a key food source for grizzly bears. Buffaloberries are usually ripe from mid-July through September, followed by grouseberries which can last well into October. Grizzly bears on the Eastern Slopes of the Rockies are food-stressed and depend heavily on berries to put on weight for hibernation. During berry season, hikers can easily surprise bears that are preoccupied with feeding on berry bushes.

Banff National Park is committed to contributing to maintenance of a non-declining and viable population of grizzly bears in the regional landscape. High female grizzly bear survival is key to sustaining grizzly bear populations into the future. By allowing female bears and cubs to make more efficient use of high quality habitat with fewer disturbances at critical times of the year, these management strategies will directly contribute to the conservation of grizzly bears.

While all of Banff National Park is bear country, if you’re hiking in a "core area", you’re REALLY in bear country.

Prepare - carry bear spray & know how to handle an encounter
Be aware - slow down, look ahead & watch for tracks, droppings, and diggings
Let bears know your there - travel in a group & make noise