Why did the 'species of concern' cross the road? 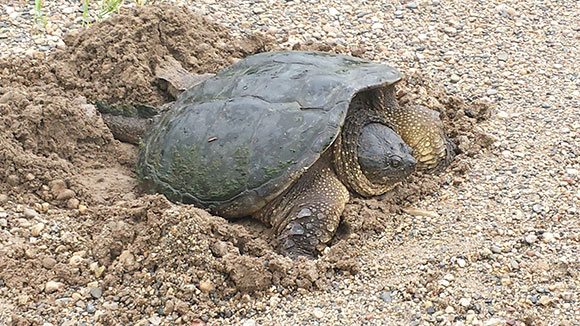 The common snapping turtle (Chelydra serpentina serpentinia) has been designated as a 'species of special concern' under the Species at Risk Act. 'Special concern' is the least critical designation for a species at risk - we're concerned about the long-term survival of the species but it isn't in imminent danger.

There are a few reasons why these guys have this 'special concern' status. They have lost a bunch of their favourite habitat (wetlands). As well, roads pose a big problem; they either want to cross a road to get to a good egg-laying place (and that often doesn't end well - kerthump) or they lay their eggs in the gravel right beside a road (late June-ish), and that doesn't end well either.

Some aspects of the turtle's biology also present challenges.

Thus, the biggest problem for the snapping turtle is adult survival. It seems that just a small percentage increase in the annual mortality of adults can really hurt a population. 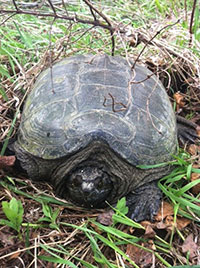 So, do we have any snapping turtles in RMNP? Well, they don't seem to be common anywhere, and we don't know much about their abundance in Manitoba. Brandon University tried in 2011 to find some in the park, but couldn't. There have been single sightings in RMNP from 2011 and 1975, however, most observations come from just outside of the park where it is more likely people will see them.

Another common question about snapping turtles is: Can they bite your finger off? The answer is no, they can't. Our common snapping turtle is sometimes confused with the alligator snapping turtle, which is found farther south in North America. They're really nasty. Our snapping turtles can be pretty defensive when out of water, but mostly they will hiss, and, if they do snap, they can maybe take a little skin at most.

So, why did the 'species of concern' cross the road? Well, it was September so it wasn't laying eggs. Maybe it was trying to find a better spot to begin contemplating hibernation. Maybe it wanted to raise its species to the next level - 'threatened' status. Maybe it was a new fitness routine. Your guess is as good as mine. 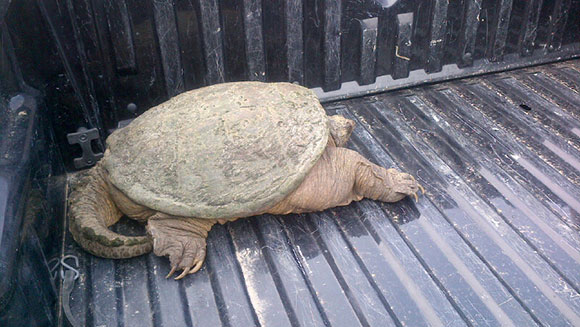 This one had its picture taken while in the back of my truck about a mile south of the Park. It was saved from injury or worse while it was trying to cross Highway 10 in Onanole, late in September 2013. I'm no expert but this one seemed pretty old - and big. I really like the prehistoric-looking tail. 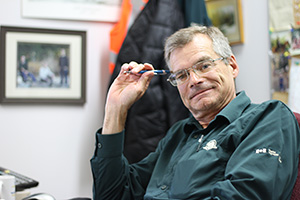 (Information sources: 'Management plan for the snapping turtle in Canada' - a draft from Environment Canada we recently received for comment; 'The Amphibians and Reptiles of Manitoba' by Bill Preston; a web search that turned up some pretty interesting stuff; and the usual local experts. I didn't make anything up, honest!)