In 2021, Parks Canada staff initiated a Western Tiger Salamander survey in Riding Mountain National Park. The goal of the survey was to gain a better understanding of the local Western Tiger Salamander population and its seasonal movements. This survey was conducted during the second migration period (late August to early September). During this time, Parks Canada staff looked for the presence and distribution of salamanders near roadways close to salamander habitat.

During migration, salamanders can move up to a kilometer from their hatching site! Unfortunately, roads and other infrastructure can impede migrating salamanders’ movements, leading to roadway salamander deaths. The data collected from the 2021 survey allowed Parks Canada staff to target specific areas along Highway #10 with frequent salamander movements. Through a cross-functional effort in late 2021, the curbs in that area were modified to help salamanders safely cross Highway #10. 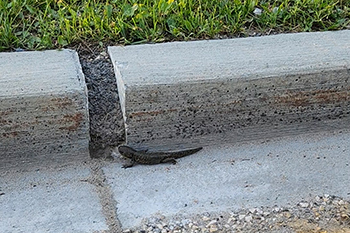 A follow-up survey is currently taking place to further monitor the seasonal migrations of the Western Tiger Salamander. Parks Canada staff are interested in seeing if the curb modifications are making a difference in reducing roadway mortality.

Keep an eye out for new “salamander crossing” signs! These will be installed along salamander migration routes to remind drivers to slow down and look out for these unique amphibians as they complete their biannual migrations.”

If you've ever driven around the RMNP area on a rainy, cool evening in late August, you've seen it - the slow, steady march of the western tiger salamander (Ambystoma mavortium) toward the underside of your car's tires. It seems so choreographed it’s almost as if a signal has gone out from the 'Great Salamander', commanding all salamanders to begin the march. I've taken particular note of this phenomenon because in terms of driving style I'm a 'salamander avoider' while my wife is a member of the 'safety first' school of thought. 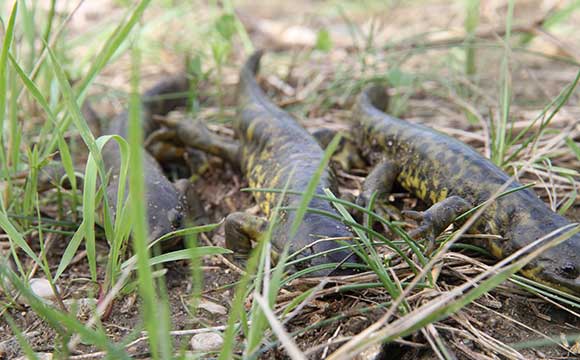 Here's the 'what'. Tiger salamanders lay their eggs in water in the spring shortly after the ice is off their pond. The eggs hatch in about 3 weeks and become larvae which are aquatic and highly predatory. In fact, salamander larvae are usually the boss predators of their pond partly because they usually don't live in ponds that contain fish as they will clobber a salamander population pretty quickly. The larvae have lungs and external gills. After about 2 - 3 months they metamorphose (the gills are reabsorbed) and take the adult form.

The adults are terrestrial. In August, they leave their larval ponds and set off overland to set themselves up for a terrestrial life - to hole up and eat bugs in quiet contentment. The flattened salamanders that you see on the road in August are the new adults just leaving their ponds to start this new life. Getting smushed on the road is just one of those life lessons I guess.

The 'why' relates to rain or at least moisture. If tiger salamanders dry up they will die, so they need to have the right conditions (mostly some rain but cooler temperatures help, too) to begin their life on land, and that rainy day in August seems to be the trigger. Other than trying to stay a bit damp, they just head out from the pond in any direction and try to find a nice hole. And, if they happen to cross a busy road in the process, so be it. 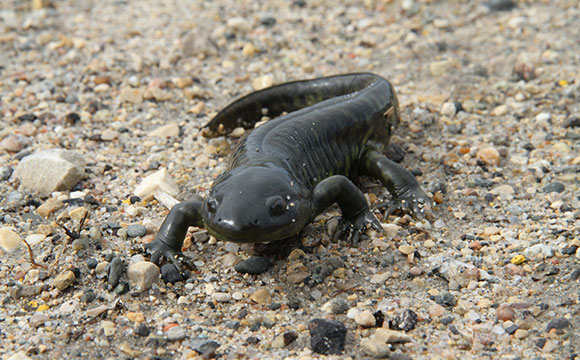 The adults live in mammal burrows or dig their own holes and are mostly nocturnal, so you don't see them very much. Overwinter survival isn't great but those that do survive head back to the pond, usually the same one they were born in, to breed. Sometimes they breed that first year, and sometimes they don't breed until their next year.

As you might expect with all those dead ones lying around, there is some concern over the long-term sustainability of the species. COSEWIC (the Committee on the Status of Endangered Wildlife in Canada) has designated the prairie population of the tiger salamander as ‘special concern’, although they don't have a legal designation under the Species at Risk Act. Like many species on the prairies, they are affected by landscape changes from road networks and wetland conversion. They are also affected by natural phenomena like drought. For example, in dry years the females may not breed at all. 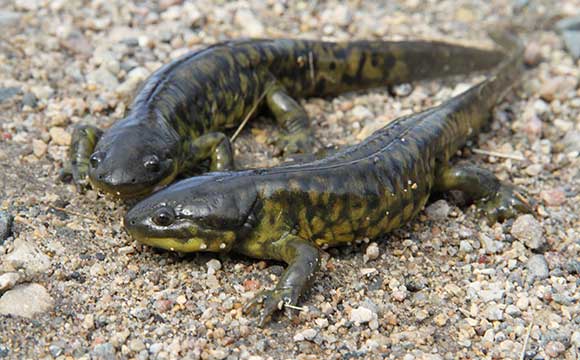 I'd like to help out the migrating tiger salamander, but I have to admit that some of my evasive manoeuvres have been a bit extreme. This year I'll slow down but leave out the tricky moves - I don't want to explain to an RCMP officer why I've been weaving. Safety first!

• No two salamanders have the same patchy skin pattern (no, I haven't personally checked!)
• Salamanders are thought to be able to live up to 16 - 25 years in the wild, but given their very low survival rate, it is extremely unlikely that you'll ever run across one that old (and how would you tell, anyway?)
• A study in the prairie pothole area (Minnedosa) showed that larval salamanders are so predatory that they can affect the foraging behaviour of dabbling ducks like mallards.