Ancient Murrelets (or "night birds" as translated from the Haida language) are a species at risk in Canada. Their population in Gwaii Haanas has been devastated by invasive rats.

SG̲in X̲aana Sdiihltl’lx̲a: Night Birds Returning has resulted in successful habitat restoration following the project. However, rats have been detected migrating across islands in recent years. The Haida Nation, Parks Canada and Fisheries and Oceans Canada are working together to continue protecting Ancient Murrelet habitat. 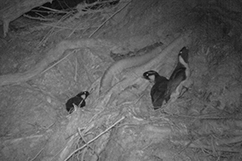 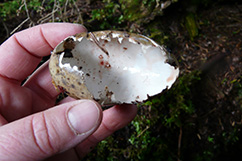 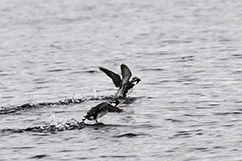 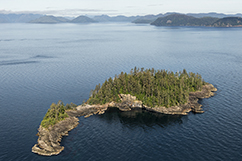 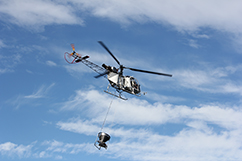 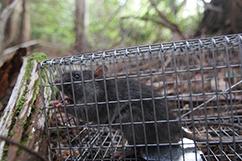 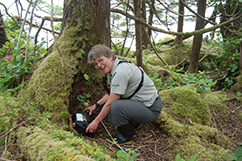 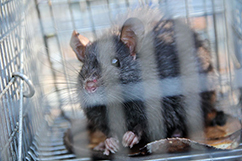 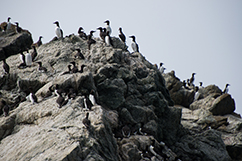 A significant number of the world population of Ancient Murrelets breed on remote islands in Gwaii Haanas. These seabirds spend most of their lives on the water.  They only come and go from small islands during breeding season.

Ancient Murrelets breed by night laying two eggs in a burrow. Hidden under the forest floor, the tiny chicks hatch. Within days, the chicks scuttle through the night-shaded undergrowth. They follow the sound of their parents as they are called to the sea.

These seabirds also once played an important role in the diet of the Haida. The colonies were once prime food gathering places.

Rats were first introduced to Haida Gwaii with the advent of maritime shipping in the late 1700s. Two types of invasive rats are currently found in Gwaii Haanas: black rats and Norway (brown) rats. They are known to occur on at least 18 islands throughout the archipelago. Their presence has had a devastating effect on the seabirds of Gwaii Haanas, eating eggs, young and even nesting adult seabirds. This has caused the birds to abandon many rat-infested islands.

SG̲in X̲aana Sdiihltl’lx̲a: Night Birds Returning aimed to restore habitat and improve ecological integrity. This project launched in 2009 with phase one occurring in 2011, and phase two in 2013. Both phases focused on the eradication of invasive rat species on specific islands. This includes Arichika, the Bischofs, G̲aysiigas Gwaay (Murchison), and Daa.a Gwaay (Faraday). The eradication of rats is necessary to improve habitat for Ancient Murrelets and other seabirds in Gwaii Haanas.

The protection of species at risk is a high priority for Parks Canada. Through initiatives like this, Parks Canada is achieving conservation results.

In 2011, Parks Canada, the Haida Nation, Island Conservation and Coastal Conservation implemented the eradication of invasive Norway rats from Arichika and Bischof islands. Arichika and Bischof islands were once home to significant Ancient Murrelet colonies. This work was supported by Parks Canada’s Action-on-the-Ground program. This program funded ecological restoration across Canada’s national parks. It was also funded by the US Coast Guard’s Oil Spill Liability Trust Fund. This fund was set up to offset the damage done to seabirds by a sunken oil tanker, the S.S. Jacob Lukenbach. It went down in 1953 off the coast of California.

A three-month ground-based eradication effort was carried out by field crews. This operation involved using a rodenticide in the specialized stations. Daily monitoring and removing rat carcasses by hand also took place.

Results on Arichika and Bischof islands

In September 2013, the eradication of black rats took place on Murchison and Faraday islands. Collaboration took place between Parks Canada and the Haida Nation, and its partners Coastal Conservation and Island Conservation. Parks Canada also drew on technical expertise from international experts in New Zealand and Mexico.  Financial contribution came from the US National Fish and Wildlife Foundation – a non-governmental, charitable body established by the US Congress.

Murchison and Faraday islands are close to Ramsay Island, which at the time was rat-free. The removal of rats on these two islands aimed to reduce the risk of a rat invasion to nearby intact seabird colonies.

This aerial technique is similar to aerial seeding applications used in forest or agricultural management. It is also a proven conservation management technique for removing rats from islands and restoring native species. It has been used extensively in New Zealand, Mexico, the United States and the Galapagos.

Results on Murchison and Faraday islands

Monitoring and research has continued since Norway rats were detected on Murchison and Faraday islands in 2017.

In order to determine where the Norway rats on Murchison and Faraday came from, DNA samples were sent to University of British Columbia Okanagan. Results found that these rats are related to rats on Tllga Kun Gwaay (Lyell Island). Lyell Island is one of the larger landforms in Gwaii Haanas. It is located to the north, less than 1 kilometre away. It is still unknown how the rats got across to Murchison and Faraday islands. It could have been by swimming, drifting on a log or via a vessel.

In September 2018, wildlife cameras picked up evidence that Norway rats had migrated to G̲andll K’in Gwaay.yaay (Hotspring Island) and Aataana Gwaay.yaay (House Island). Rodenticide was distributed on Hotspring and House islands and islets in November to eradicate an estimated 6-12 rats.

In July 2019, Norway rats were discovered on Taw HlG̲aahl Gwaayts’ads (Tar Island), and K’aadxwa Xyangs Gwaayts’ads (Agglomerate Island), followed by Xiina Gwaay.yaay (Ramsay Island) and again on Hotspring Island in August 2019. This is the first time rats have been detected on Tar, Agglomerate and Ramsay islands.

Ongoing Monitoring and Next steps

To find out more about rat population dynamics, data continues to be collected and analyzed. Time is also being spent carefully analyzing past restoration and biosecurity efforts to plan a future response. Before any further conservation work on invasive species occurs, local and international partners are assisting the Gwaii Haanas team to determine next steps and biosecurity measures. An Invasive Species management plan is being developed to better understand invasive species and the direction that should be taken.

Help prevent the spread of rats

Travelling to Gwaii Haanas? Rats are great stowaways. Help prevent rats from being introduced to more islands. This can be done by maintaining a rat-free vessel.