Fire on the mountain

Fanned by strong winds, a smouldering lightning strike quickly became an intense and rapidly moving fire. Decades of fire suppression had created unnaturally high amounts of dead timber and ground debris, which fueled the fire. These factors initially hindered fire fighting efforts, but fortunately, the fire was affected by an unusual wind event. Winds from an ajacent valley created an eddy effect, similar to a rock in a river, which turned the fire back on itself and stalled its advance. This gave fire crews a chance to gain control. 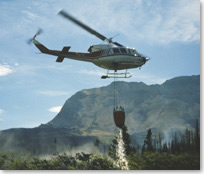 Progress was made bulldozing guards (e.g. removing flammable materials from an area in front of the fire) to contain the fire. Helicopters dropped water on the fire and crews burned vegetation between the fire front and the guards. At the peak of fire fighting, the park employed 180 people, 13 bulldozers, 7 water trucks and 8 helicopters.

On the first day, an Incident Command Team was established with representatives from Parks Canada, Alberta Environmental Protection, the Blood Tribe, the Municipal District of Cardston, the RCMP, and other agencies. This team dealt with regional concerns and opportunities for mutual support. Their combined experience was important when resolving issues such as the safety of people and property. Natural processes like fire do not respect our boundaries. Working with our neighbours was a positive, and crucial, aspect of this fire.

By September 18th, the fire was classified as "under control". A total of 1521 hectares area was burned, nearly all within the park and the Blood Timber Limit. No large animals died in the fire. Most were able to flee the area, only to return immediately after the flames died down. New plant growth was already sprouting when winter snows finally covered the area. Over the following years grasses, shrubs, wildflowers and wildlife have thrived.

The most serious impact of the fire was the bulldozed fire guards (catlines). Vegetation was removed to create a line which the fire would be unable to burn across. These scarred swaths were the one area where the park helped with natural regeneration. Soil, logs and vegetation were pushed back with backhoes and crews turned sods rightside up so the grass and wildflower roots could re-establish themselves. Restoration was so successful that it is now difficult to recognize where the catlines were.

While Waterton had not seen such a fire since 1935, history tells us fire has been a frequent event and it helped shape the landscape we see today. Research indicates that the Sofa Mountain area has burned about every 95 to 100 years over the past four centuries. The last major fire in this area was 130 years ago. Years of fire suppression had created unnaturally high fuel loads, a factor contributing to the intensity of the fire. The risk of uncontrollable fire in this section of the park is now greatly reduced, but remains high elsewhere in the park.

We've learned that there has never really been a choice of whether there will be fire, but under what conditions it will occur. How can fire and the landscape be safely reunited? Prescribed burning is one technique. A fire "prescription" describes the objectives of a planned fire and sets out precise conditions and procedures necessary to burn effectively and safely. Well-trained specialists choose to light a fire, under optimal conditions for reducing risk. By choosing the sites and timing of these burns carefully, we can achieve important ecological goals and provide an additional measure of fire protection.

Isn't setting a fire interfering with nature? Since the glaciers retreated about 10,000 years ago, both lightning and humans have ignited the landscape. It has been a part of grassland, brush and forest ecosystems throughout their existence.

Aboriginal peoples set fires for many reasons, including to create grazing areas, herd wildlife and maintain travel routes. During the era of exploration and settlement, fires were set mainly to clear land of unwanted brush and trees. Today, we cannot simply "let nature take its course" since uncontrolled wildfire poses unacceptable risks. Instead, its ecological role can be restored with prescribed fire.

When fire roared through the Sofa Mountain forests and surrounding grasslands, many important things happened.

Nutrients locked in dead plant material were transferred into the warm, blackened soil. This recharged soil encouraged germination of dormant seeds and resprouting of native shrubs and perennials. The fire's intense heat also opened lodgepole pine cones and released their seeds over the area.

Fire also keeps woody plants, like aspens, Douglas fir and willows (adapted to cooler, moister soil conditions) from invading fescue grasslands. Out on the prairie a mat of dead grass that shaded the soil and choked out new grass was replaced with a carpet of fresh green vegetation. 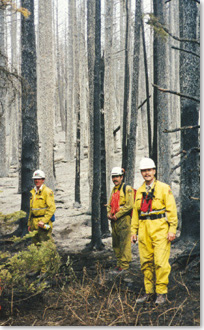 Burned trees, whether standing or fallen, provide important wildlife habitat . Rare birds like Lewis' woodpecker and hawk owls live in burned areas by choice. Dead and down trees also become home for thousands of insects, creating a pantry of bear food. Grizzly and black bears also benefit from the abundant regrowth of huckleberries and saskatoons.

If you could fly over the site, you would see a patchwork of intensely burned, lightly burned and unburned areas. This results in a variety of vegetation types and ages, which will, in turn, support a greater variety of wildlife. This is the essence of a healthy ecosystem. Fire also helps control the rapid spread of insects and disease which can occur in mature, even-aged forests. Fire may play a key role in averting the decline in the area's whitebark pine due to a debilitating introduced blister rust.

The most common reaction of visitors seeing the fire site was sadness and regret over the "devastion" which they saw. Yet views of the burned area are fascinating - ghost forests interspersed with glades of green shrubs and plants, fresh shoots of grass rising from blackened tufts, noisy nutcrackers and curious bears. Because of its location near the Chief Mountain Highway, the Sofa fire site can become an important place to better understand and experience the rejuvenating role and effects of fire.