A brief history of the Icefields Parkway

Located along the North American continental divide, the Icefields Parkway stretches 230-km and links Lake Louise in the south with Jasper in the north. The story of the Icefields Parkway began over 50 million years ago. Fierce tectonic forces pushed the ocean floor and transformed it into the mountains that today flank the Great Divide. Ice, water and wind shaped the mountains and valleys over millions of years.

As rugged and daunting as the terrain surrounding the Icefields Parkway may seem, people have explored the area for centuries. Long before there was a Canada, Indigenous people hunted and traded over the mountain passes and valleys of the Canadian Rockies. The earliest European travelers sought out Aboriginal guides and followed them along trade and hunting routes.

The Canadian Pacific Railway’s completion in 1885, along with the creation and promotion of Canada’s first national park, brought thousands of visitors to the Rockies and made it possible for mountaineers and explorers to venture out into the Great Divide area. Tales of their adventures spread far and wide, attracting attention to the area.

By the end of the 19th century, the Canadian Pacific Railway responded to the growing interest in mountaineering in the Rockies by giving seasonal contracts to Swiss guides. They led mountaineers and tourists in explorations of the area. Meanwhile, to the north, tourism in the region was also gathering momentum with the establishment of Jasper National Park in 1907 and the Grand Trunk Pacific Railway reaching Jasper in 1911.

As an economic project during the Depression Era, the Government of Canada decided to transform what was then known as the “Wonder Trail” into a single-track road. In 1931, construction began for the Icefields Highway: a new road that would make the famous mountain path accessible to everyone. It took 600 men and nearly 10 years to complete the project. With only one tractor per crew, most of the work was completed by hand and with teams of horses. 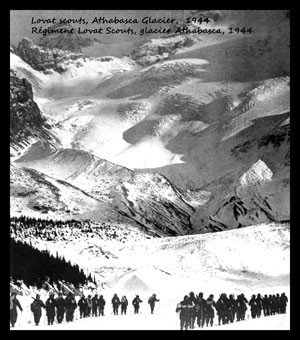 Since 1940, the Icefields Parkway has witnessed different groups frequenting the area. Throughout World War II, allied soldiers fused the area to train for combat. The American 87th Mountain Infantry spent two months on the Columbia Icefield, testing an over-snow vehicle while British and American armies practiced mountain warfare on the glaciers.

By the 1950s, cars rose in popularity and as more drivers discovered the Icefields Parkway’s dizzying cliffs and breathtaking scenery around each sharp turn, tourism began to take off. Jasper locals Bill Ruddy and Tom McCready started offering the first snow machine tours onto the Athabasca Glacier and travelers flocked to the mountains to hike, climb, horse-back ride and sightsee. Lodges like Jimmy Simpson’s ‘Num-Ti-Jah’ Lodge and the Brewster brothers’ Icefield Chalet became welcomed stops along the way.

By 1961, the new paved and realigned modern Icefields Parkway officially opened. Attractions, viewpoints and campgrounds along the Icefields Parkway were making adventure accessible to everyone. In 1969, Brewster took over operating the snowmobile tours on the Athabasca Glacier.

Today, more than 1.2 million people travel the Icefields Parkway each year, mostly during the summer months. In winter, it attracts visitors for ski touring, ice climbing, snowshoeing and winter exploring. The inspiring scenery, rich history and abundant wildlife attract visitors from all over the world. Attractions, accommodations and campgrounds allow explorers of all ages and abilities to experience and venture out into the magnificent Great Divide area.

Following Aboriginal guides, the earliest European fur traders moved through ancient trade and hunting routes through the mountains of the Great Divide. From artists to botanists and surveyors, everyone that traveled the Glacier Trail helped open the mountains to development, mountaineering and tourism.

The guides and outfitters that made exploration, surveying and mountaineering possible became legends in their own time and part of the developing story of tourism in the Rockies. By the time the Canadian Pacific Railway was completed in 1885, travelers were flocking to the Banff and Lake Louise area. Jasper followed soon after. Finally, in 1931, construction of the Icefields Parkway began to make the spectacular wilderness of the Continental Divide accessible to everyone.

In 1931 as part of a Depression Era economic project, the Government of Canada recruited 600 unemployed men to build a road along A.O. Wheeler’s “Wonder Trail”. The new highway was set to be a 230-km single-lane gravel track connecting Lake Louise and Jasper. To employ as many men as possible, the road was carved mainly by hand with the aid of horses that pulled graders, plows and wagon loads of earth and one small mechanized tractor per camp. Surveyors made the route up as they went and if too much work was required to fill depressions or remove hills, the line was relocated. After 10 years of hard work, the Icefields Highway was ready to welcome visitors.

Build it and they will come

Since its completion in 1940, the Icefields Highway has welcomed tourists, explorers, artists, mountaineers, allied armies and movie stars. While the Icefields Parkway gained popularity over time, cheaper cars in the 1950s made it easier for people to escape to the mountains. Travelers flocked to the area looking for that extreme beauty and exclusive set up in the mountains to hike, climb, horseback ride and sightsee. By the 1950s, most of the attractions along the Icefields Parkway were operational: Jimmy Simpson was running his 16-room Num-ti-jah Lodge, and tourists drove right to the toe of the Athabasca Glacier to get on snowmobile tours offered by Jasper locals Bill Ruddy and Tom McCready.