The tweets of Banff’s songbirds provide clues about the health of Banff National Park’s forests and alpine. Researchers hike for hours to remote locations to capture and interpret these notes from nature. Bird populations may rise or fall due to stressors like habitat loss, declining insect populations, and changing weather patterns. Recordings of their songs reveal patterns about which birds live in the park and where they are.

Bird survival in harsh environments requires special adaptations which might be behavioural in nature. Birds may change the season in which they lay their eggs for example, or even physical changes such as the Ptarmigan who changes the colour of their appearance to white in winter to blend in with the snow.

These same adaptations that allow alpine birds to survive in extreme conditions like cold, wind and frost can cause them to experience challenges when the temperature rises. As a result, these species are more sensitive to changes in climate and habitat. Birds that can adapt to a variety of environmental conditions such as Robins may out compete these alpine-adapted species for food. Because alpine ecosystems are susceptible to climate change – the presence or absence of species adapted to this environment can indicate changes to the overall ecosystem.

Maintaining healthy ecosystems is critical to Parks Canada and to understand whether this is being achieved requires monitoring. 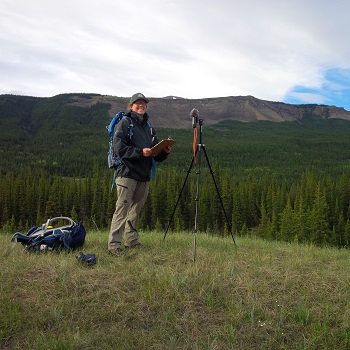 To do this, Parks Canada staff travel on foot (or horse) to key locations in the park to record birdsong. They arrive at their planned spot by sunrise to set up. It’s important to get there early so they can hit the record button when birds are most actively singing. These recordings are reviewed by an acoustic specialist to identify birds by their songs. The results of the recordings help build a picture of which birds are using the landscape over time. Population trends have been identified for 80 species and 15 bird guilds. Aerial insectivores, such as flycatchers and swallows are part of the same guild* as both species catch insects in flight.

*A guild is a group of birds made up of different species, that share the same space.

Tracking songbird populations is just one of several monitoring programs designed to assess the health of Banff’s forests. Parks Canada researchers will continue to monitor and listen to the clues that birdsongs reveal about the park. 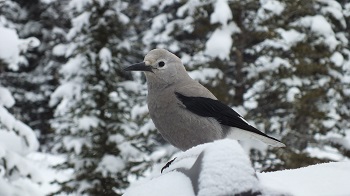 The following sound clip is of a Clark’s Nutcracker. It was recorded as part of the monitoring program.

What can you do to help?