In the Rocky Mountains, valley bottoms are critical. Not only do they provide high quality wildlife habitat, but they also offer a way for wildlife to move through an otherwise inhospitable mountain environment. Valleys are also important to people. Most human activity in the Rockies, including roads, railways, buildings, trails and facilities, is confined to the valley bottoms. This competition for space poses a significant problem, especially for wide-ranging species such as wolves and grizzly bears. 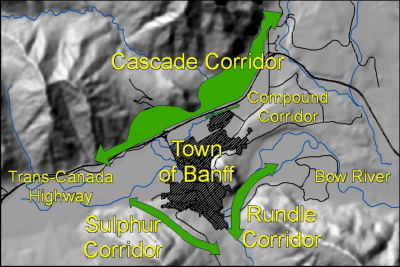 The Bow Valley in Banff National Park is no exception. Its low elevation and open forests contain important wildlife habitat and links wildlife populations north and south of Banff National Park. However, the Town of Banff, Trans Canada Highway and Canadian Pacific Railway, along with ever increasing human use, severely restricts wildlife from travelling through the area. If the Bow Valley becomes a barrier to sensitive species, their populations in the Rockies may become isolated, and ultimately threatened. The only way to ensure that wildlife can safely move through this busy valley is to preserve key wildlife corridors.

What Is A Wildlife Corridor?

Simply defined, a wildlife corridor is a protected route that allows wildlife to move safely between areas of suitable habitat. In the Banff area, corridors are typically narrow, funnel-shaped tracts of land between the developed areas and the steep mountain slopes.

Why Do Wildlife Need To Travel?

On a regional scale, wildlife must travel long distances to find mates and denning sites, expand home ranges, and to take advantage of seasonal changes in food and weather. Local movement is necessary to enable wildlife species to access all of the available resources in their home range. Long distance movement is essential to maintain genetic variability and sustain populations over a large area.

What Makes An Effective Corridor?

The ideal corridor depends on the species using it. For example, wary species require wider, more secure corridors than species accustomed to human presence. In addition to width, other factors that influence corridor success are: ease of travel, terrain, vegetation cover, topography, snow depth, physical barriers, and human presence such as smells and noise. The length of a corridor, or the distance between quality habitat patches, must also be short and direct.

Individual corridors connect particular species with specific habitat patches. In order to meet all species' needs and connect wildlife to the larger region, a network of corridors must be protected.

Why Focus On Large Carnivores?

Large carnivores (bears, wolves, cougars, lynx) have the greatest movement needs of all wildlife in the Rocky Mountain ecosystem. In theory, if their requirements are met, then so to will the needs of smaller, though equally important, species.

Large carnivores are also shy and tend to avoid areas of high human use. Accommodating the movement needs of these predators helps to maintain natural predator / prey relationships. This lessens the chances of producing an environment where habituated or common prey species dominate the system (such as elk in the Banff townsite).

In 1993, key corridors in the Bow Valley were identified and researchers began monitoring wildlife use of these corridors. A number of impediments to wildlife movement were identified including buildings, facilities, and areas of high visitor use. One of the priorities of the Banff National Park Management Plan is to protect and restore these key wildlife corridors. Management actions to date include:

Cascade Corridor Restoration
To reduce habitat fragmentation and restore montane habitat along the Cascade Corridor, several structures were removed including the bison paddock, horse pasture and stables, and the cadet camp. Additionally, the west side of the Minnewanka Road is closed during the winter and use of the airstrip is restricted.
Fairholme Range ESS
The Fairholme Range Environmentally Sensitive Site was established to protect the largest intact block of montane habitat in the park. A voluntary closure was implemented in order to reduce human use of this critical area. The Fairholme serves as both habitat and as an important corridor for wildlife movement through the Bow Valley.
Middle Springs Closure
Parks Canada and the Town of Banff jointly established the Middle Springs Wildlife closure. A 500 metre wide band of forest above the Middle Springs housing development is legally closed to people to protect part of the Sulphur Mountain corridor. This helps large carnivores move through a pinch point, across the Bow Valley, and around the town of Banff.