Dr. Warwick Vincent’s research on “biofilms” in Quttinirpaaq National Park shows the extent of climate change in the Arctic.

At the bottom of Ward Hunt Lake, a freshwater lake about 750 kilometres from the North Pole, lies a hidden world… and it’s bright orange.

The orange “biofilms” (or mats of microbes) that carpet the lakebed are part of the changing climate. “This lake is a model for what is happening in many parts of the Arctic,” says Dr. Warwick Vincent of Laval University.

Dr. Vincent has been coming to Ward Hunt Island in Quttinirpaaq National Park since 1998. A professor and Canada Research Chair at Laval’s Department of Biology and Centre d'études nordiques (Centre for Northern Studies), he’s had a front row seat on the spectacle that is climate change.

One change in particular has caught his attention: Ward Hunt Lake is no longer freezing to the bottom throughout the year.

And that has led to the all-season activity of the orange biofilms—a symptom of (and potential contributor to) climate change.

A regime change in the Arctic

All the models indicate that the northern latitudes will show the greatest and most rapid climate change. And we have seen some spectacular changes. So much of the landscape depends on ice, and we’ve seen ice-covered lakes that have been frozen for a thousand years suddenly become open water. 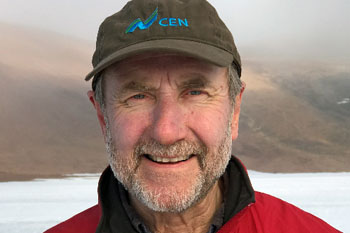 Arctic lakes were once assumed to freeze completely during the long night of winter. In such deep freezes, microbial activity stops.

But with arctic lakes no longer freezing down to their beds, biofilms are persisting and active throughout the year. In the oxygen-depleted environment of the lakes, they produce methane, a greenhouse gas thirty times more potent that carbon dioxide.

Given the huge number of lakes that dot the North, the cumulative effects may significantly ratchet up the feedback loop that drives climate change.

What’s more, the changes may affect fish species such as Arctic char. On the face of it, warming temperatures seem to benefit fish populations—there is more liquid water. But the biofilms contribute to the low-oxygen environments of the lakes, creating unfavourable conditions for the fish..

Dr. Vincent’s research is the product of a long-standing collaboration with Parks Canada that brings him annually to this very northern tip of North America. He and his team of students and collaborators use ice-penetrating radar, sediment samplers, DNA techniques and GoPro cameras to explore the submerged world of Ward Hunt Lake.

Dr. Vincent sees Quttinirpaaq National Park as a unique vantage point for studying climate change. Protecting the park ensures it will continue to serve as a living laboratory.

Tourism may not be “a big ticket item here,” he says, but points out that the park’s management plan calls attention to the locale’s vital importance in monitoring the global environment.

Visitors who do make it to Quttinirpaaq are in for an elemental, other-worldly experience.

“Its name means ‘top of the world’ in Inuktitut,” says Dr. Vincent, “and you really do feel that you’re standing at the top of the world here, knowing that all the Americas are to the south of you.”