The return of the sea otter

What will the return of kuu ("sea otters" in the Haida language) mean to the people of Gwaii Haanas and Haida Gwaii?

Take a dive into these blue-green waters, a stone’s throw from the rocky shoreline, where the kelp lies massed on the surface.

Thriving kelp forests are much less common among these islands than they once were, but this one is a healthy forest of bull kelp. The sunlight streams down through waving kelp blades. Among them flash schools of young herring, rockfish and salmon.


From the shoreline out, the sea floor is home to chitons, snails, prawns, abalone, crabs and sea urchins.

All at once, a lithe shape—long neck, flat head, webbed back feet—darts down among the kelp holdfasts to scoop up a sea urchin.

Kuu (sea otters) are returning to these waters after a long absence, and their return is sending out ripples of change across both the ecosystem and the community.

Once common along the B.C. coast, kuu were hunted to local ecological extinction in the late 1800s for their rich fur.

As a result, coastal ecosystems experienced major changes. One significant effect was an explosion in the population of sea urchins, a favourite food of kuu.

Sea urchins love to eat kelp, a critical habitat for many marine species. Without kuu to keep them in check, sea urchins grazed away the kelp forests.

The result is the “urchin barrens” frequently found here—stretches of sea floor that contain sea urchins and little else.

But in the late sixties and early seventies, 89 kuu from an Alaskan population were relocated to the west coast of Vancouver Island.

They expanded their range naturally, as did their Alaskan cousins to the north. Now, more than 150 years since local extinction, kuu are being spotted in Gwaii Haanas and other parts of Haida Gwaii.

What happens when a keystone species returns to an ecosystem after a long absence?

It’s a vital question for the Council of the Haida Nation, who, along with Parks Canada and Fisheries and Oceans Canada, manages Gwaii Haanas through the Archipelago Management Board. Two multi-partner projects are exploring the potential outcomes.

Help for the kelp

If you’d had a view of shallow coastal waters off the Gaysiigas Gwaay shoreline in 2018 and 2019, you would have seen divers drifting above the sea floor, using short rakes to scoop up sea urchins and drop them into nets. 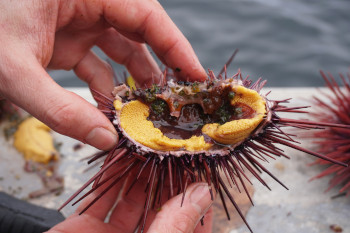 Guuding.ngaay (red sea urchin) is a traditional food on these islands. The urchins collected were shared with local communities and schools.

This project, called Chiixuu Tll iinaasdll (Nurturing Seafood to Grow), essentially mimicked the presence of sea otters by removing at least 75 percent of the sea urchins within the 3-km long restoration area.

When Jaasaljuus Yakgujanaas, junior biologist for the Council of the Haida Nation, dove through the Gaysiigas Gwaay site six months after it had been harvested of sea urchins, she was amazed.

“It was incredible too see how the kelp had recovered,” she says.

While kelp forests will benefit from the return of kuu, the animals are still seen as a mixed blessing here.

Kuu eat many other kinds of shellfish along with urchins, and so pose a threat to local fishers—and to the Haida way of life.

Kuu seem to lounge in the water like lazy swimmers, lying on their backs with their feet upturned. When eating, they place their food on their stomachs, as if they were having breakfast in bed. They also use tools, employing rocks to break open shellfish.

Lacking the insulation of blubber, kuu depend on food energy to keep warm. They can eat up to 25 to 30 per cent of their body weight daily. For a large male, that can translate into 11 kilograms of shellfish a day—the same as eating seven rotisserie chickens with four kilograms of mashed potatoes on the side!

Here’s where a meeting of partners and perspectives may be able to provide a path forward.

The Xaayda Gwaay.yaay Kuugaay Gwii Sdiihltl’lxa The Sea Otters Return to Haida Gwaii Project will develop an interactive ecosystem model, thanks to input from project partners and Haida Gwaii communities, to explore the impacts of returning kuu on these islands.

The Haida Gwaii Kuu project will also explore strategies for managing the return of kuu. “In the past, people co-existed with the sea otter,” says Ms. Guujaaw. “There is interest in traditional management being fostered again.”

As traditional management and other strategies are considered and developed, the overall approach will follow the management principles of Gwaii Haanas where cultures and ecosystems—from ocean floor to mountaintops—are considered as a whole.


The Haida people have long depended on the sea for their livelihood and have managed its resources according to the principle of Gina ‘waadluxan gud ad kwaagid— “everything depends on everything else.”