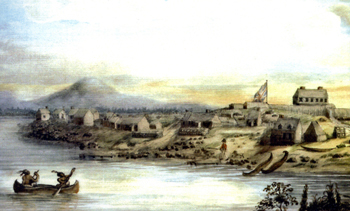 The community of St. Joseph was not always thought of as the military Siberia of Upper Canada. During its occupancy many happy hours were spent there by the majority of people.

Looking upon the ruins which now remain, it is difficult to realize this spot was once a major fur trading centre on the upper Great Lakes. Here red coated soldiers performed garrison duty. Children laughed and romped. Men and women lived, loved and trod paths now obliterated by time. They planted their vegetable gardens and flower plots; performing all the innumerable tasks of maintaining a home in the wilderness. To this day one can see roses, asparagus and parsnips, growing wild through the passage of time.

Life upon the fringes of civilization led to many incidents in which friendship between the First Nations and the people of St. Joseph, be they military or civilian, flourished. Gifts from the indigenous people were a very important source of provisions for the Fort and town surrounding it. Corn became vital in the maintenance of the garrison, community and livestock. Generosity between the Aboriginal peoples and the community was often reciprocal. 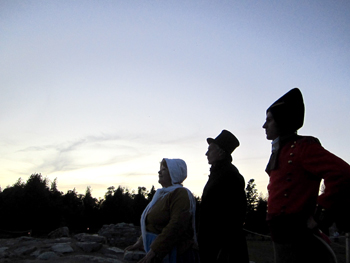 Living along the frontier
© Parks Canada

The friendship and mutual esteem may be considered unusual, but the history of later events proves that at Fort St. Joseph, First Nations and European relationships were friendly. At the moment of crisis, the War of 1812, the First Nations Allies stood solidly with the British in the very first offensive military manoeuvre, the taking of the American Fort Mackinac.

Thus human relationships stretched out from Fort St. Joseph and in turn, impinged upon it, involving the British Military, British Indian Department, fur traders, Métis, First Nations and settlers. Lines of blood, status, race and nationality were sharply drawn on the frontier, where all were facing the severe challenges of the northern environment. As a result, the human qualities and ties between individuals often influenced the course of events as much as traditional group loyalties.