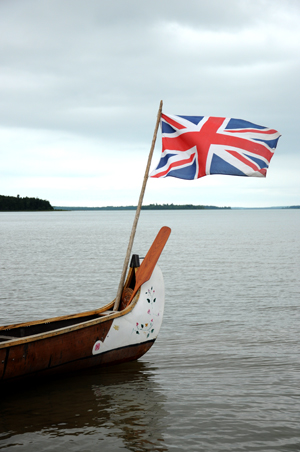 A Union Jack flutters in the breeze
© Parks Canada

There is an esprit de corps among paddlers. And, the voyageur canoe trip from Sault Ste. Marie to Fort St. Joseph commemorating the 200th anniversary of the capture of Mackinac was no different.

Alright, let’s set the scene…it’s the 200th anniversary of the War of 1812. Voyageur canoes and paddlers gather at Sault Ste. Marie on July 15th, just a few days before the anniversary of the capture of Fort Michilimackinac (a.k.a. Mackinac). The energy in the group is palpable. The paddlers are motivated. The expectation of the 3-day trek has everyone’s stomachs gyrating. No, this is not the anticipation of war and the uncertainties which arise from physical conflict. We’re a group of modern day enthusiasts interested in history and the outdoors. For many, there’s been recent practice. For others, 36-foot canoes accommodating 12 or more passenger are a novelty. After a few simple ceremonies and photos to commemorate today’s event, the flotilla leaves the dock area on flat water. The excitement of the paddlers translates into a steady rhythm which builds momentum and creates a breeze to extend the Union Jacks flying at the stern.

Some paddlers sing, others concentrate on keeping time with the paddler in front of them, while still others soak in the surroundings of the St. Mary’s River. The water is quiet with no boat traffic, but there are a few people along the shore hailed by our passing fleet. The local residents make an effort to meet the group along the way. They remind paddlers of why they embarked on this journey and why they need to keep paddling onwards.

Flotilla participant Susan Graham said, “I was delighted to see the reaction of residents and cottagers as we passed by...with flags waving and sometimes fireworks...it was nice to share the excitement.” 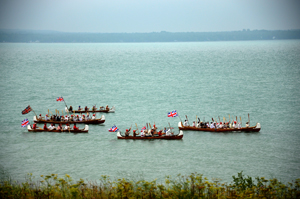 After a long day in the powerful July sun we see Richards Landing, our destination, slowly appearing in the distance. Although arms may be tired and energy waning, the knowledge of a friendly island welcome pushes us onward. The satisfaction of accomplishing what earlier that day was in the realm of uncertainties keeps everyone in stroke as we reach our objective.

The next day brings new boats, new paddlers and more calm water. The sun is ever present and a new section of river is in sight with Fort St. Joseph now our destination. We have a couple of snack and food breaks scheduled and morale is high. After lunch the flat water turns a bit rougher and the wind shifts so it is blowing across our bow. It’s decided to consolidate paddlers and canoes to add more power to the remaining crafts in the face of the extra effort needed.

We get to within view of the point the fort was built on, not far off schedule, and assemble the canoes for a group arrival. After landing the boats safely, we walk up the hill to the historic ruins of the fort and satisfied, gather with the military re-enactors and others assembled.