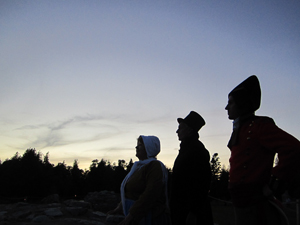 "I embarked on the morning … with two six pounders and every man I could muster". ~ Captain Roberts

From Fort St. Joseph, on a remote island at the north end of Lake Huron, an alliance of British forces, voyageurs, Métis and First Nations warriors distinguished themselves by launching the first major action of the War of 1812.

2012 marks the 200th anniversary of the War of 1812, a defining moment in our nation’s history. With more than twenty War of 1812 sites, Parks Canada is the leading presenter of historic experiences from this pivotal era in North American history. These dramatic places tell the story of how a fiery conflict with an uncertain outcome brought forth unity, bravery and perseverance, and how this remarkable shared history can help us connect with our roots and values as a nation. Fort St. Joseph played a key role in the early days of the War of 1812.

On July 17, 1812, Captain Charles Roberts and the British military personnel posted at Fort St. Joseph joined with First Nations, Métis and voyageurs in a surprise attack on the American Fort Michilimackinac located one day’s paddle to the southwest. This led to the successful capture of the fort without bloodshed, and would become the first in a line of successful military manœuvres for the British, which helped solidify an alliance of nations. 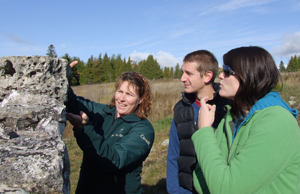 It must have been a sight to behold—Captain Roberts and the other leaders on board the Caledonia, the colourfully attired voyageurs paddling their Montreal and North canoes, and a large flotilla of canoes filled with Métis and First Nation people united in an effort to represent their collective interests and responsibilities.

Exactly 200 years later, on July 17 & 18, 2012 Parks Canada and Algoma 1812 plan to Relive the Moment as we commemorate the Algoma Region’s people and events involved in the War of 1812. Fort St. Joseph will once again become the gathering place for the historical alliance between the British, voyageurs, Métis and First Nation peoples of the western Great Lakes region. Experience military demonstrations, a canoe re-enactment, and explore First Nation and Métis encampments all situated among the ruins of Fort St. Joseph. The events continue in nearby Sault Ste. Marie, Ontario with HistoryFest from July 19 to 21!

Let the unique, spectacular and unspoiled landscape of Northern Ontario carry you back in time.