Sault Canal and the other Great War 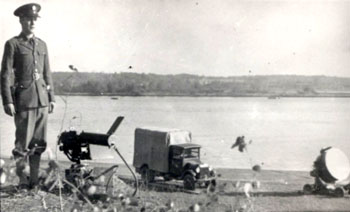 Troops were stationed at the Sault Ste. Marie Canal to guard the lock during both World Wars. The 51st Regiment ensured the lock remained unscathed during the First World War. Just prior to the declaration of war in 1939, when tensions were running high, a surprising discovery brought the potential for sabotage at the canal to the forefront of everyone’s mind once more.

In April 1939, 136 sticks of dynamite were found in a shed at the Sault Ste. Marie Canal. The story was raised in the media and the government was called upon to ensure the protection of the country’s canals as they were critically important to wartime transportation. With the advent of World War II, the canal once again became off limits to residents as fears of possible aerial attacks were raised. The Sault Ste. Marie and Sudbury Regiment was placed on active duty at the canal in the summer of 1939. However, by November, it was felt that a contingent of the R.C.M.P. would be sufficient to stand guard.

The Americans continued to feel the lock system was vital to North American commerce, and therefore a vulnerable point. After the Japanese attack on Pearl Harbour in December 1941, fears intensified and the defense of the American locks grew to include thousands of military personnel. 900 U.S. soldiers were sent to Canada to set up radar stations in several northern communities and defend the area around Sault Ste. Marie. About one hundred of these troops were deployed to guard the Canadian lock and they set up camp on South St. Mary’s Island. Buildings were sandbagged, large searchlights and anti-aircraft guns were put into service and barrage balloons were suspended at key locations around the two Saults to prevent attacks from low flying enemy aircraft.

Despite continued fears of an attack throughout both World Wars, the Canadian and American locks were spared. Most of the U.S. troops stationed on the Canadian side were withdrawn by late 1943, but a Canadian guard remained until 1945. By 1943, passenger traffic, restricted for the first few years of the war, was once again permitted to pass through the canal bound for ports west of Sault Ste. Marie and the locks resumed their normal routine.