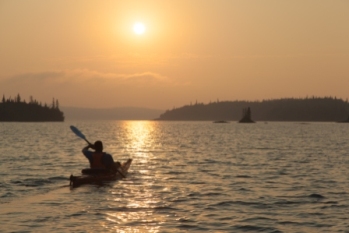 Paddling into the sunset at Rossport on Lake Superior
© Parks Canada

Have you ever touched a cloud? Thanks to my summer job with Parks Canada, I have, and I got to explore some of the natural treasures along Lake Superior's north shore. The opportunity presented itself while I was working at the Sault Ste. Marie Canal when I was asked to participate in a summer photo shoot for the Lake Superior National Marine Conservation Area.

Heavy fog blanketed the shores on the morning of the first day of the shoot. Today would be my first time paddling a kayak, so I had to figure out how to paddle in a straight line and stay dry while doing it. Luckily, I had it mostly figured out by the time the fog lifted and the photo shoot began. I really enjoyed kayaking and I’d love to try it again but I doubt I’ll ever paddle quite as long and hard as I did that first day.

The afternoon was spent fishing on Superior’s “inland sea”, but the fish must have already had a good lunch because we barely got a bite all day. We headed to the final shoot location to get some camping shots at sunset. Since we had time before dusk, we also squeezed in more kayaking shots with the setting sun. I had been having a great day, so my heart was screaming yes, but my arms were a little less enthusiastic. I'm glad my heart won out because the scene of us paddling toward the Battle Island lighthouse while the water glowed pink and orange from the setting sun is a sight I won't soon forget. 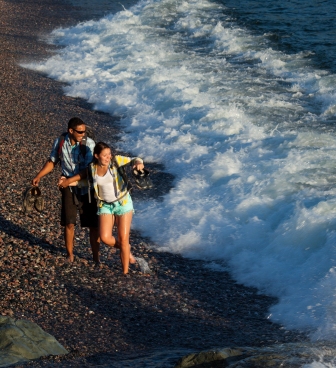 Walking in the waves of Lake Superior
© Parks Canada

One of the sites chosen to be in the photo shoot was Canada's first silver mine, Silver Islet. As luck would have it, I was allowed to tag along the next day. Silver Islet is a tiny island in Lake Superior and the shots we were looking for would be taken from a helicopter with the doors removed for an unobstructed view. I've flown in a plane quite a few times, but it’s nothing like a helicopter as the world seems to just fall away. One minute we were on the ground outside the hangar and the next, the airport was hundreds of feet beneath us. As we flew along the eastern coast of the Sleeping Giant, the shades of blue and turquoise in the water resembled that of a Caribbean island. The mine on Silver Islet is entirely underwater. In 1884, the mine failed to receive a shipment of coal in time to power the de-watering pumps, and the mine flooded, never to be reopened. After making a few passes, some of them feeling like the helicopter completely tilted on its side, we had our shots.

As we flew back to Thunder Bay, our pilot gave us the chance to reach out and touch a cloud. Almost like standing in the mist coming off a waterfall, the cloud felt like a cool thick fog and it was the only time during the entire flight the air felt cold. If I ever have that chance again, I hope to have a bottle with me to bring home some cloud to put on my shelf.