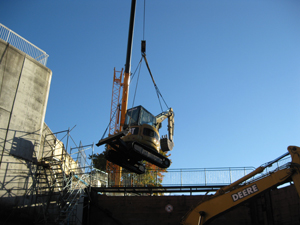 Investments in 2010 to improve the reliability and performance of the recreational lock at the Sault Ste. Marie Canal benefit boaters, visitors and future generations. In fact, the lock now operates better than when it was first constructed and we couldn’t have done it without you.

The Recreation Lock, which was constructed inside the historic canal between 1996 and 1998, was due for significant repairs and mechanical rebuilds. The lock had needed to be closed several times in the last three years, most noteably for most of the 2009 season to replace the gate anchors—hinge-like structures supporting each of the massive gates. In order to do this, significant infrastructure enhancements were required. 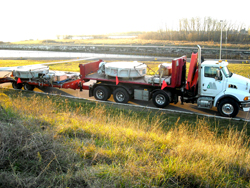 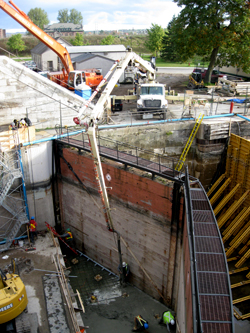 We had kept detailed records of each mechanical and structural failure over the years. Problems were confirmed by divers and cameras during underwater inspections. The data collected helped engineers determine what work was required and begin the design process without having to drain the lock, a process that is very expensive. As a result, when the lock was actually emptied the work could begin immediately.

To stop the flow of water through the canal, stop logs were inserted upstream of the lock. A cofferdam was constructed below the lock and the water in the lock chamber removed using submersible pumps. Check out the timelapse video! Once the lock was unwatered, significant machinery was lowered into the chamber to do the hard labour.

Two of the canal’s valves, were completely rebuilt. They sit in the bottom of the canal near the stop logs and control the flow of water into the lock from up river. A new concrete reinforced sill was poured, where the winter gates sit at the downstream end of the lock. The old sill was so deteriorated it was allowing water to leak through it. While all parts, machinery and valves were exposed we also seized the opportunity to rebuild, replace, or repair all mechanical components, such as drive lines, motors, gear boxes, ladders and hydraulic cylinders.

The recreation lock was reopened on time for the 2011 navigational season. Although there were some minor delays during start up, the lock operated at 98% for the 2011 season--one of the best performances on record. The lock at the Sault Ste. Marie Canal National Hsitoric Site now runs more dependably, more efficiently, and much faster than it has at any time in the last decade.

On behalf of Parks Canada, I would like to thank everyone - local residents, the City of Sault Ste. Marie, its contractors and staff—for their support, interest and contributions to improving one of Canada’s treasured historic places.

We hope to continue to serve our visitors and Canadians well into the future!