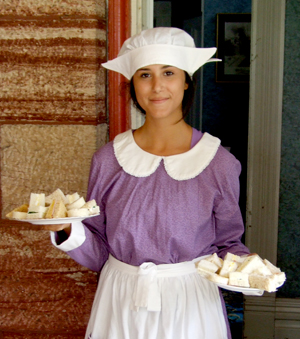 Heritage Teas had been an institution at the site from the late 1990s until 2003 when the Canal’s Friends Association used to host them. In 2010, Parks Canada staff and volunteers revived the tradition to overwhelmingly positive feedback.

Historically, Sunday afternoons were the time when nearby residents would visit the grounds of the Canal for picnics and leisurely strolls, because this was also the day the passenger vessels passed through the lock . For this year’s Heritage Teas, the verandah was opened up in addition to the residence’s reception rooms, providing an airy, open feeling. Staff scoured old recipe books for tasty sandwiches and desserts which would provide a sense of what life might have been like in the early 1900s. To make the transformation complete all staff and volunteers wore historic costumes and shared historical facts about the house, food and tea from around the turn of the century.

Plans for next years's Heritage Tea series are already underway with more fine foods, period music, historical trivia and old-fashioned ambiance. Prepare to spend a Sunday afternoon with us!