Underwater archaeology on the Restigouche River

In 1760, a French flotilla bringing provisions, arms and ammunitions to New-France lost three large vessels during a confrontation with English war vessels during what is now call the battle of the Restigouche. 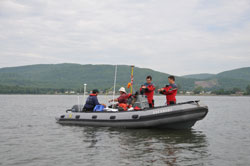 UAS Underwater archaeologists preparing to dive on the wreck of the Bienfaisant
© Parks Canada / C. Dagneau

While 2010 marks the 250th anniversary of the Battle of the Restigouche (1760) and the 40th anniversary of the underwater archaeological excavation (1969-1972) on the French frigate the Machault, Parks Canada's Underwater Archaeology Service (UAS) sent a crew to the Restigouche River delta where it connects with Chaleur Bay to conduct additional research from June 15 to June 30th.

The main objective of the project was to verify the state of preservation of the wrecks of the Machault and the Bienfaisant as well as a ballast site, and verify the state of conservation of timber from the wreck Marquis de Malauze that are in storage in the area. A second objective consisted of surveying the bottom of the river for other vestiges associated with the battle using side-scan sonar and a magnetometer.

A preliminary review of the underwater observations seem to indicate that the remains related to the Machault and the Bienfaisant are in a fairly good state of conservation thanks to an important layer of sediment on top. This visit offered for the first time an opportunity to sketch of the visible remains of the Bienfaisant, which have remained untouched since 1760.

A systematic search of the river bed using side-scan sonar allowed the archaeologist to identify many new potential features in the underwater battle ground where the Machault and the Bienfaisant rest. It is likely that anchors, cannon balls, small boats or other metallic objects will be located in future surveys. 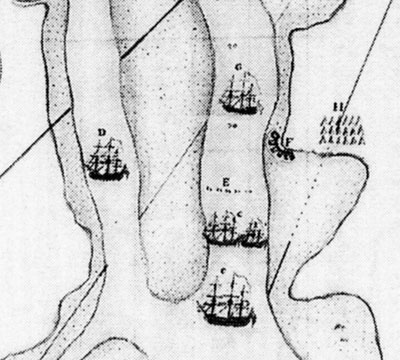 In the area known as Pointe à la Batterie, the survey led to the discovery of a new wreck where in the 1760s five other unknown French or Acadian ships were intentionally sunk in the channel to prevent English warships from entering the river (letter E on the historical map above). In spite of zero underwater visibility in that area, the archaeologists were able to feel wooden parts of the wreck in its resting place. The high resolution sonar image attached (Fig. 3) shows two rows of frames six meters apart and 11 meters long that stick out of the silty bottom. The exact identity of the ship is unknown but its location, dimensions and material suggest that it could be one of the ships sunk in 1760. 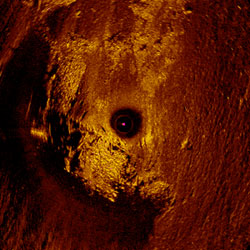 To this day, the UAS, the Battle of the Restigouche NHS and the Ministère de la Culture, Communication et de la Condition feminine have agreed not to excavate nor to bring up objects from the new discovery. At this point, the onsite conservation of the wreck is preferable.

The UAS will analyze the data recovered from the newly discovered wreck and will determinate if further research could be undertaken with partners from the NHS, the province and other interested parties.

Finally it is important to note that these submerged archaeological resources are protected under the Lois sur les biens culturels du Québec.