Among others, these two projects at Parks Canada demonstrate the usefulness of Virtual 3D technology.

Parks Canada archaeologists excavated some 1,500 m2 of ground beneath the Dufferin Terrace in Quebec City, uncovering in the process the remains of the Saint-Louis Forts and the old Château Saint-Louis. These digs unearthed such a tangled collection of remains that it is proving difficult to make the archaeological information understandable and explain it clearly to visitors and the general public. Virtual 3D reconstruction techniques were considered a possible tool for communicating this new information more easily.

Fort Conger, Quttinirpaaq National Park, northeastern Ellesmere Island -a site featuring remains of British and American exploration camps dating to the late 19th century as well as 20th-century- is now under stress from both natural and cultural elements. 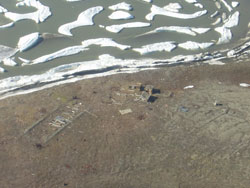 Its eroding bank endangers unique cultural resources and may expose contaminants left on site by some of these early expeditions to the marine environment. Climate change is also a factor as warmer temperatures may accelerate decay and affect permafrost, causing structural changes to the buildings and ground surface. These threats must be monitored or mitigated according to current standards and laws while maintaining the cultural integrity, historic authenticity and sense of place of this exceptional site and its structures. 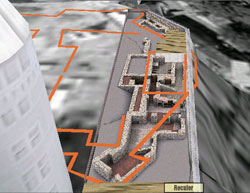 In the case of the Saint-Louis Forts and Châteaux, the use of Web-based technologies now allows Parks Canada to make accessible and present the information that archaeologists are able to visualize and understand as archaeological discoveries are made. The 3D presentation synthesizes the findings on the superposition of soil layers or architectural elements and even their re-use. The three-dimensional animation creates different perspectives and makes optimal use of suggested reconstruction sketches to compare the current landscape with the remains found. Canadian Culture Online, a Department of Canadian Heritage program, provided an excellent opportunity for ensuring the development and online presence of this project.

In the case of Fort Conger, archaeologists from the University of Calgary and Parks Canada's Western and Northern Service Centre based in Winnipeg are planning to use laser scanning to capture three-dimensional images of the footprint of Fort Conger and use these images to archive and reconstruct the site in virtual reality. This application of 3D technology, which will allow the team to document and preserve the site and provide data useful in the structural analysis of the buildings and foundations, may eventually take the form of an interactive website for the public.

In addition to the Saint-Louis Forts and Châteaux, a few other National Historic Sites containing archaeological digs were selected for trials of these new technologies as part of the 3D Tours project. 3D visualization enables online users to take virtual tours of the sites and see them from all possible perspectives.

The three-dimensional images obtained at Fort Conger with the short-range laser scanner can be used to digitally archive threatened heritage resources as well as test various building scenarios and analyze activity areas in a three-dimensional context.

These projects are a very tangible indication of the benefits of investments in information technology in Canada. This project illustrates the wide range of possible applications of interactive and immersive virtual simulations that contribute to public education.