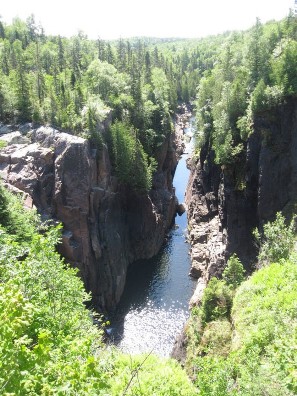 Over the course of this past month, along with other students, I have had the opportunity to take part in many fun and informative training and orientation activities to become a Visitor Information Officer for Parks Canada. It has been an unforgettable learning experience.

We visited many places along the north shore that we had never been exposed to before, like Hurkett Cove, Ouimet Canyon, Mazookama Falls, and Bottle Point. Although all of us are from the north shore, we were struck by the beauty hidden along the coast of the Lake Superior National Marine Conservation Area (LSNMCA). It’s quite disheartening that many of these places are not commonly known, and this has motivated us to spread the word to both locals and tourists about the breathtaking attractions in our area.

The Hurkett Cove Conservation Area on Black Bay near Dorion is very appealing for hiking, fishing, picnicking, wildlife and bird watching, or paddling. It’s an ideal place for people with varied interests. The easy to moderate hiking trails are well kept, and the birding is phenomenal. Along the trails, we heard a wide range of bird songs, as well as, learning about different plant species.

Ouimet Canyon in Dorion was another site our group toured. The short walk to the canyon was enjoyable, but it was nothing compared to the breathtaking view once you reach the two viewing platforms. Interestingly, in June snow was still visible at the bottom of the canyon! 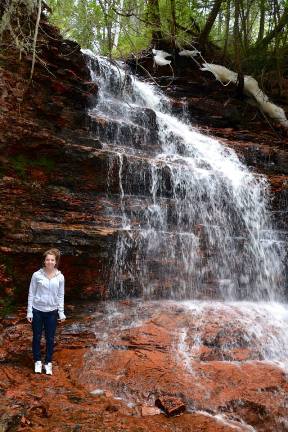 Mazookama Falls just 20 minutes east of Nipigon was my favourite of all the places we visited. Before Parks Canada, I was unaware of this hidden gem. The looping trail is moderate to difficult, and follows alongside the waterfall to the top of the mountain/cliff. There are various smaller falls, but the main falls are at the top of the mountain and are very beautiful.

Bottle Point is just past the Steel River east of Terrace Bay, and marks the eastern boundary of LSNMCA. It took our group approximately 15 minutes to follow the fairly easy hiking trail to the point. The trail led to a narrow beach where the Steel River empties into Lake Superior. Our entire group stood there in awe and appreciation for the Great Lake.

Our orientation also included more well-known places, like Terrace Bay beach and falls, Aguasabon Falls and gorge, and Rainbow Falls Provincial Park. Being able to tour them with my new-found knowledge of the area helped me to appreciate them like never before. In many ways, this helped me to see the top of Lake Superior with new eyes, as a visitor destination.

I am very thankful for Parks Canada’s training and orientation. If not for Parks Canada, I would not have taken the time to visit the many places mentioned, and would have continued to take for granted what is right in our backyards. This experience has given me more knowledge and appreciation of the area, and the LSNMCA. It will also bring me more success as a Visitor Information Officer. 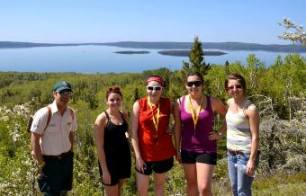