2014-15 Report on Annual Expenditures for Travel, Hospitality and Conferences

As required by the Treasury Board Directive on Travel, Hospitality, Conference and Events Expenditures, this report provides information on the total annual expenditures for each of travel, hospitality and conferences for the Parks Canada Agency for the fiscal year ending March 31, 2015. It also provides the variance explanations from the previous fiscal year in each of these areas.

This information is updated annually and does not contain information withheld under the Access to Information Act or the Privacy Act.

Expenditures on travel, hospitality and conference fees incurred by federal departments and agencies are related to activities that support a departmental or agency mandate and the government's priorities.

In particular for Parks Canada, this includes managing national parks, national historic sites and national marine conservation areas on behalf of Canadians. Parks Canada is a proud steward of these heritage places and protects and presents them for the benefit and enjoyment of present and future generations of Canadians.

Parks Canada has the mandate to protect and present nationally significant examples of Canada's natural and cultural heritage, and foster public understanding, appreciation and enjoyment in ways that ensure the ecological and commemorative integrity of these places for present and future generations.

The programs that support Parks Canada's mandate include:

National parks, national historic sites and national marine conservation areas, of which Park's Canada is the proud steward, offer Canadians a variety of recreational activities and learning experiences as well as a unique opportunity to personally connect with these heritage places. There are more than 21 million person-visits annually to the heritage places administered by Parks Canada.

Further information on Parks Canada's mandate and programs can be found in the Reports on Plans and Priorities (RPP) and in the Departmental Performance Report (DPR).

Annual Expenditures for Travel, Hospitality and Conferences of Parks Canada

Totals may differ due to rounding

This section provides a brief explanation of significant variances from the previous year's annual expenditures for each category.

At the end of fiscal year 2014-2015, the Agency's expenditures for travel increased by 14 percent compared to 2013-2014. This is mainly due to an increase in wildfires in National Parks requiring the relocation of fire crews as well as travel related to initiatives in support of the Agency's priorities. Since 2009-2010, the Agency has decreased its travel expenditures by 34 percent.

Compared with fiscal year 2013-2014, the Agency's hospitality expenditures have decreased by $14 thousand or 7 percent. This reduction is explained by efforts to increase efficiency in support of Government-wide cost saving initiatives.

Compared with fiscal year 2013-2014, the Agency's conferences fees expenditures have increased by $33 thousand or 20 percent. Since 2013-2014, Parks Canada has been increasing its participation at conferences in support of its mandate.

Trend of the Last 5 Fiscal Years

In line with the Directive on Travel, Hospitality, Conference and Event Expenditures, Parks Canada adopted a plan to manage these expenditures with prudence and probity. Enhanced controls and procedures were put into place to ensure that travel, hospitality and conference related expenses were reasonable, appropriate and supported the Agency objectives and priorities.

The Agency has reduced its travel, hospitality and conference expenditures by 34 percent since 2009-2010 as a result of pro-active management of travel, hospitality and conference expenditures. Parks Canada continues to monitor the rate of spending as part of its regular internal reporting process and, where deemed appropriate, will continue to introduce internal policy instruments and management structures aimed at reducing spending. 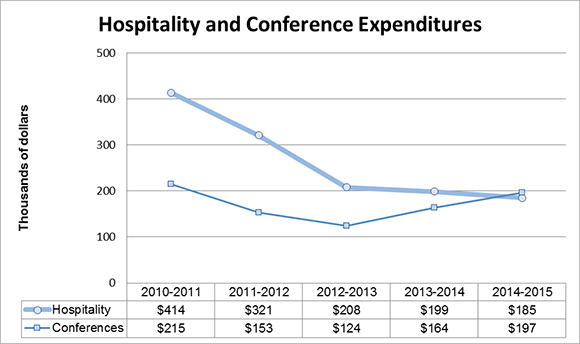