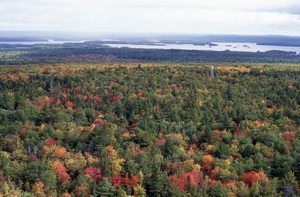 In 1974, the establishment of Kejimkujik National Park protected the forests from commercial cutting. Today, three-quarters of the Park’s woodlands are young, mixed stands of softwoods and hardwoods. Older White pines, which escaped fire and the axe, tower over the younger growth. Red maple, Large-toothed aspen, White birch, and Red oak stand out against a background evergreens.

Pockets of old-growth forest still stand tall in Kejimkujik. These stands are special because of their majesty and their rarity. Today, less than one percent of all the woodlands in Nova Scotia are over 100 years old. Since much of the region’s older forests are being lost to intensive harvesting, Kejimkujik is one of very few places where people can experience such woodlands. Old-growth forests are an important habitat that Kejimkujik protects.

About one-fifth of Kejimkujik’s forests are softwoods. A fraction of these are towering groves of old-growth Eastern hemlocks. Pure hemlock stands create an open and quiet forest atmosphere. They began to establish themselves hundreds of years before today’s 350-year old trees even took root. Although some foresters consider old trees “overmature,” these old-growth woodlands have important value. 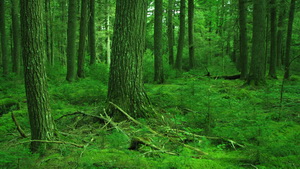 Hemlocks have fine feathery needles that create a layered canopy, which allows little sunlight to hit the forest floor. Under this shade, few plants can grow except for thick mosses and liverworts. These cool and shaded forests also favour delicate and uncommon orchids, such as Spotted coral-root and Checkered rattlesnake plantain.

The shallow roots of tiny hemlock seedlings are supported by the moist soils. Hemlock seedlings can survive in the shade, and since they are long-lived, they eventually dominate the forest.

On the forest floor, mushrooms recycle nutrients from fallen needles, twigs, and branches while bracket fungi grow like shelves on tree trunks. Where huge old trees have blown down, the extra nutrients provide for the new growth of dense patches of hemlock seedlings and ferns. This creates a variety of habitats for wildlife, lichens, and fungi.

Even the treetops provide homes for wildlife. The Northern goshawk, a powerful and swift woodland hunting hawk, prefers to nest in these hemlock stands. The thick upper canopy hosts many insects, which provide important feeding and nesting habitat for the Blackbunian warbler, a bird easily identified by its orange throat.

A walk among the awe-inspiring giants on the Hemlock and Hardwoods trail allows you to experience the beauty and wonder of these special forests.

Old-growth hardwood forests in Kejimkujik are found on top of glacially-formed hills where the soil is deep and well drained. These forests are hundreds of years old. Although they make up less than one percent of Kejimkujik, you can see excellent stands along the Peter Point Trail and the Big Hardwood Carry (Portage E).

Impressive Yellow birches, Sugar maples, and Beech trees comprise the upper canopy. The smaller Striped maples, often heavily browsed by deer, survives in the shade below. More light comes through the canopy of a hardwood stand than in a hemlock stand, allowing ground cover such as ferns to grow there.

Beech trees, once a healthy part of these forests, have been hard hit by a fungal disease and an insect introduced from Europe over a century ago. Cankered and stunted beeches are widespread in Nova Scotia although occasional smooth-barked giants can be spotted.

Old-growth hardwood forests, with their lush growths of lichens, abundant seeds and nuts and many tree cavities, provide good habitat for birds and small mammals such as the Southern flying squirrel.