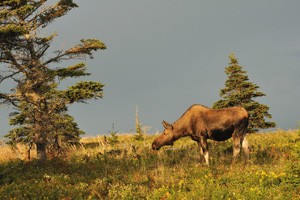 The moose is the largest living deer. It affects the growth of the forest in the park by selectively browsing only certain species of trees.

The moose is the world's largest living deer, standing almost two metres at the shoulder. It is characterized by its large size, long face with overhanging muzzle, dewlap or 'bell' under the throat, long legs and short tail. The moose is usually dark brown to black, with beige or gray lower legs. The moose is most active at night but can be seen any time of day. It eats non-grass herbaceous plants in the summer and the bark, twigs and buds of woody plants in the winter.

The male moose, or bull, has large, palmate antlers. They drop their antlers in the fall after the mating season, and re-grow them over three to five months in the spring and summer.

The female, or cow, moose gives birth to one or two calves in May to June. A moose can live up to 15 years in the wild.

Moose are circumpolar, living in the boreal forests throughout the northern hemisphere. In North America, they may be found across Canada and the northern parts of the United States. Canada is home to four subspecies of moose: 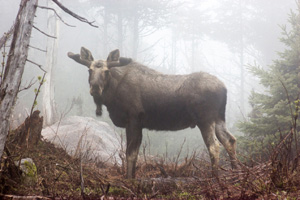 A male moose re-growing his antlers in the spring.

Wolves became extirpated from Cape Breton by the mid-1800s. Without wolves, moose have no major natural predators. Some moose are affected by a brain worm carried by white-tailed deer and some young moose may be killed by bears; however, neither of these factors is enough to control moose population.

In the 1970s, a large spruce budworm outbreak killed much of the boreal forest of Cape Breton Highlands National Park. The regeneration of balsam fir and white birch following the budworm outbreak provided large volumes of food for the moose. With an abundance of food and lack of predators, the moose population grew quickly. In 2011, it was estimated that there were two moose per square kilometer in Cape Breton Highlands National Park.

Moose are rare on mainland Nova Scotia, so why don't we move some of the Cape Breton moose to the mainland? 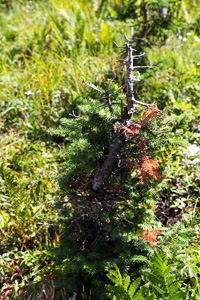 In 2007, Parks Canada constructed moose exclosures in two severely-impacted areas of Cape Breton Highlands National Park to see how vegetation recovers when it is not browsed by moose. The exclosure on North Mountain shows a remarkable increase in regeneration and tree height. A study by Saint Francis Xavier University showed that in 2012, only five years after the exclosure was built, there was seven times more biomass inside the exclosure than there was outside. This indicates that recovery is possible in some areas of Cape Breton Highlands National Park if moose numbers are reduced.