At 0830 on August 23, 2015 a group of three scramblers left the parking lot near the Great Divide Lodge in Yoho National Park to scramble up the SW slopes of Mt Daly. After hiking up the trail to Sherbrooke Lake they followed the route to the east side of the col between Mt Niles and Mt Daly. Following the normal scrambling route they climbed a steep rubble/talus slope to a short cliff band with an exposed traverse along the top of the cliff, before proceeding up the SW slopes to the summit.

On their descent, at approximately 1630 hours, the first two members of the group made it back across the exposed traverse when they observed the third person slip and fall from part way along the traverse. The person fell between 15-20m down the cliff band before tumbling approximately 100m down the steep talus slope below. 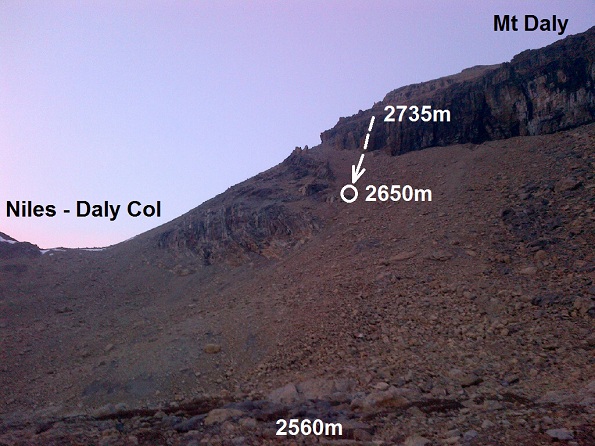 Accident location on the SW slopes of Mt Daly from the helicopter staging area, 2015-08-23

The remaining two members of the group made their way down to the injured person as quickly as possible. The patient was unconscious but breathing, and bleeding profusely from a significant head injury. The two friends bandaged the patients head, positioned the patient to allow for easier breathing and wrapped the patient in extra clothing. The reporting person then ran for help while the other friend stayed with the injured person.

At 1847 hours a broken cell phone call came into Banff Dispatch from Sherbrooke Lake describing the incident, followed soon after by a call from the Great Divide Lodge. Three Visitor Safety staff flew to the accident site with Alpine Helicopters and after 10-15 minutes of searching they located the injured patient and friend. Two Visitor Safety staff slung into the accident site, packaged the patient with the help of the friend and slung the patient out to the staging area 100m below. The patient was then loaded into the helicopter and flown to Lake Louise where they were transferred to EMS for further treatment and ground transport to the Mineral Springs Hospital in Banff. After being assessed and stabilized in Banff the patient was transported by STARS Air Ambulance to Calgary. The remaining rescuers and the friend were picked up by helicopter and brought down to Lake Louise just before dark.

This group had the experience and skills to complete this trip and made a number of good decisions when the accident happened. They reached the patient as quickly as possible, carefully placed the patient in a position of comfort, and stopped the bleeding as best they could. They also wrapped the patient in warm clothing and placed extra padding beneath the patient to minimize heat loss. After this they sent out a reporting person to call for help which allowed just enough time to complete the rescue before dark. The assistance of the two hikers the reporting person met on the trail was also key in getting the call for help out as quickly as possible.

There are several useful reminders which came out of this incident. The first is the importance of checking your hand and footholds carefully when scrambling. Tapping a handhold or foothold to check its integrity prior to putting your weight on it is an important skill help you move safely in steep terrain in the mountains.

The second is the benefit of wearing a helmet while scrambling in steep terrain. Helmets are typically used in areas where falling rock or ice is expected but they can also help minimize the consequences of a fall. While there is no way of knowing whether a helmet would have prevented a serious injury in a fall of this magnitude, wearing one may have benefited the patient.

The third reminder is the usefulness of having some form of emergency communication device such as a satellite phone or satellite communicator like a Delorme inReach or Spot device. These devices can help save significant amounts of time in a rescue response as well as help pinpoint the exact location of the emergency. Devices which allow for two way communication are particularly useful in establishing the nature and severity of the incident.

Finally it is always a good idea to maximize the amount of daylight you have in case things go wrong. While this group had a reasonably early start, beginning even earlier would have given the rescue teams a bit more time to work with had it been required.