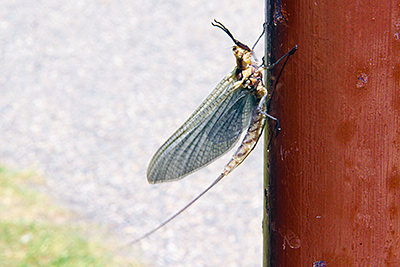 Hexagenia have many names:  mayflies, june bugs, shadflies, fishflies. Trout fishermen, who know a lot about them, call them drakes. Right around now in Clear Lake is when Hexagenia become adults for a couple of days. For those two joyous days they don't bother to eat; they just fly around above the lake, breed and spray their eggs over the lake. Then we see them on land because they are pretty poor fliers and they get blown off course, attach themselves to a building, and die. The eggs, on the other hand, sink to the lake bottom somewhere and hatch shortly after being deposited. 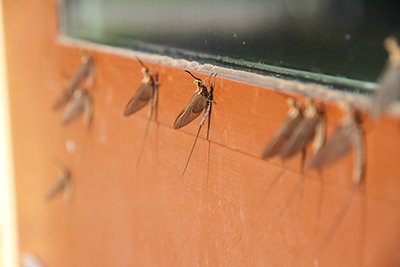 Most of their lives - which can be 2 years - Hexagenia live as an immature form (larva or nymph), and they're uglier, if that's possible. They live in U-shaped tubes in the mud in the bottom of the lake, eating algae and other organic material. They matter to Clear Lake because the nymphs are very important fish food. For species like whitefish that like to forage on the lake bottom, they are close to essential. 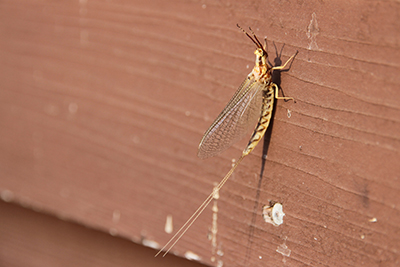 Hexagenia can't survive under low oxygen conditions, which is why we get worried if we don't see very many adults emerge. In Clear Lake we are concerned about oxygen levels at the lake bottom, so it is always reassuring to see them show up every year.

Lately, Hexagenia and other mayfly species have been the subject of close study as people watch to see how or if lakes like Lake Erie and Lake Winnipeg are recovering from nutrient pollution. They are seen as an important indicator of health for some aquatic systems.

So if someone asks you what those gross things are called, you now have some options to give them. The important point is, in this case, gross is good.