Parks Canada: a century of conservation in the Mountain National Parks

Over its first century of operations, Parks Canada has become a world leader in conservation. Much of this knowledge and expertise have been gained from protecting the natural legacy of the Mountain National Parks: Banff, Jasper, Mount Revelstoke, Glacier, Waterton Lakes, Kootenay and Yoho.

Towering mountain peaks and remote glaciers. Sweeping prairie grasslands and old-growth forests. Pristine alpine lakes and streams. Apart from offering visitors breathtaking scenery, the seven mountain national parks are also home to a stunning variety of plant and wildlife. They’re places that safeguard ecosystem services, such as clean water, oxygen and flood control for both park visitors and non-visitors. Without careful management to preserve ecological integrity, however, we can lose this biodiversity. 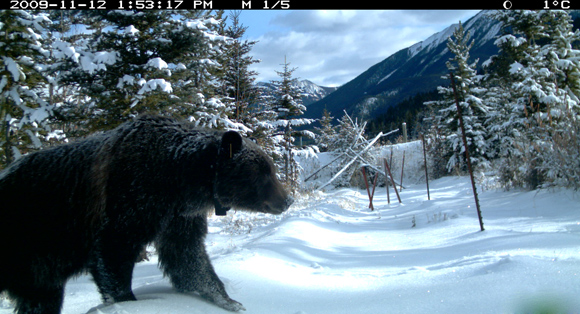 In the early years of the Mountain National Parks, the needs of wildlife were often secondary. In 1886, for example, with Banff National Park barely a year old, a wildlife survey noted game animals in the park were disappearing. Rather than question the merits of hunting in a national park, however, the survey simply recommended bringing in more game for the hunters.

Until the 1990s, the natural balance between predator and prey in Banff’s Bow Valley was seriously compromised. Region-wide wolf-elimination campaigns throughout the southern Rocky Mountains were employed leaving elk populations—the natural prey of wolves—to flourish. Even when wolves tried to re-colonize Banff, they often died on the busy Trans-Canada Highway. Unnaturally large elk populations, in turn, led to major declines in aspen and willow trees. And the loss of these trees diminished habitat for songbirds and beaver.

Between 1999 and 2003, Parks Canada and its community-based partners established wildlife corridors and secure habitat areas, which encouraged carnivores to hunt again in the lower Bow Valley. The installation of highway fencing along the Trans-Canada Highway reduced wildlife-vehicle collision by more than 80%. While wary animals like wolves and bears were slow to use the crossing structures when first built, they are now used regularly, providing animals with a safe means of crossing the road, access to vital habitat, food and mates. Since 1996, 11 large mammal wildlife species have used 24 of 38 crossing structures more than 150,000 times. In addition to re-establishing the traditional predator-prey relationship, park managers selectively culled elk populations and worked with the community to burn land; this allowed more diverse and natural vegetation patterns to reappear.

The result has improved ecosystem balance: the Bow Valley has far fewer elk but a greater variety of other mountain wildlife. Willows have recovered. And trembling aspen are thriving in the prescribed burn areas, creating new habitat for beaver and songbirds.

Today, in Canada’s unique model of conservation, national parks integrate the need to maintain and restore biodiversity with the interests of those who seek to experience and benefit from these special places: enthusiastic visitors, tourist operators and commercial developers, private landowners and First Nations. This complex mix of players can present challenges for park management, but also provides a wellspring of creativity to develop solutions that benefit everyone.

As the stories below illustrate, conservation is often a catch-up game to restore diminished biodiversity. At the same time, we are building on past successes so we can live in even better harmony with our natural surroundings. Through it all, the Mountain National Parks are establishing more effective and collaborative efforts among sometimes competing interests.

So what does biodiversity include? Biodversity includes diversity among species, genetic variation within individuals and populations, and diversity in the ways organisms interact with each other and the non-living world around them.

When species become endangered, it’s often because the processes that keep their habitats healthy have been disrupted. Throughout the Mountain National Parks, Parks Canada is working to bring ecological processes (like fire, flooding, grazing and predation) more in line with their historic state.

For much of the 20th century, the mountain national parks, like many other jurisdictions, considered fire the enemy. Sharp-eyed fire officers virtually eliminated wildfires from the parks. Their well-meaning efforts, however, had unintended consequences.

By the 1970s, research revealed that fire was a natural and important process in many of our national parks.

Different areas of the mountain national parks burned in different ways and at varied frequencies. Mimicking this cycle of fires can rejuvenate a forest: reducing the density of trees helps prevent more serious or even catastrophic wildfires, and fire also helps create room for more types of trees. Younger and more vigorous trees can also better fend off insects, invasive species and disease. In addition, fire encourages the growth of more diverse habitat, which supports traditional predator-prey relationships.

Research has shown that fire suppression interrupts this natural cycle and all its benefits, leaving less variety of wildlife habitat; more forests prone to disease and insect attacks; and increased risk of catastrophic wildfire. Consequently, in 1983, the mountain national parks began using prescribed fire (an intentional fire managed by specialists) to replenish the landscape.

Each prescribed fire has specific objectives—from reducing competition for a species at risk to restoring grasslands to creating a fireguard to protect wildlife habitat, as well as keeping residents and visitors safe from catastrophic wildfires.

These fires are carefully managed and are often delayed for years until weather, forest and soil conditions are just right. And where Parks Canada does not start a fire can be as equally important as where one is introduced on the landscape. While a prescribed burn would not be conducted in caribou habitat in the mountain national parks, a prescribed fire could be used to create healthier forests and provide rich forage for animals ranging from rodents to omnivores.

Long before these fires are set, managers carefully create a prescribed burn plan involving a variety of techniques to achieve their goals—from creating “fuel breaks” in the forest by manually thinning trees and pre-burning selected areas to using natural limits such as mountains, rivers and vegetation to manage the spread of fire. All the while they consult closely with the local communities.

The result: stronger and healthier forests, and a richer environment for all the biodiversity that depends on them.

A sound approach to monitoring birds in Mount Revelstoke and Glacier

Given their small size, agility, and frequent movement, birds pose a special challenge for conservation—especially given the limited resources of park staff to monitor them accurately. Without solid data to understand them, however, rare and endangered species may be put at even greater risk. 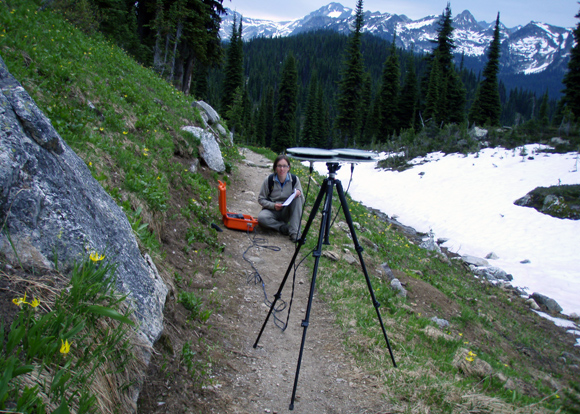 In response, Mount Revelstoke and Glacier national parks developed and tested an innovative approach: digital recording technology. With help from volunteers, the two parks set up sound stations to record and identify different birds in numerous locations. By analyzing the recordings, scientists are learning where different species prefer to live, eat, mate and raise their young, as well as whether species are disappearing. This knowledge may well identify how to maintain, recover or protect populations of threatened birds in the two parks.

Cleaning up water and limiting development in Banff

During the 1970s and 1980s, scientists observed high concentrations of phosphorus and other nutrients in the lower Bow River below the Village of Lake Louise and the Town of Banff. Excessive nutrients lead to algal blooms that can threaten drinking water, and the health of livestock and crops, as well as angling and other water sports. Given both the importance of healthy aquatic ecosystems and the fact that hundreds of thousands of people in cities and farms in southern Alberta and Saskatchewan depend on water from the Mountain National Parks, cleaning up the water became a critical priority.

By 1989, following upgrades to municipal sewage treatment plants in Banff, Lake Louise and Jasper, high phosphorus levels had begun to tail off. Additional upgrades in 2003 further improved filtering systems, enabling the plants to remove residual nutrients and debris. By 2011, for the first time since 1973, pristine water was flowing again from the parks.

Water quality was only one challenge facing Banff National Park. In 1996, the Banff-Bow Valley Task Force report recommended sweeping changes to preserve the park’s ecological integrity. In response, the Government of Canada amended the park’s management plan, which restored wildlife corridors and capped growth in the Banff townsite. Ecological monitoring in subsequent years has shown that biodiversity and natural processes have improved.

A toe-hold to safety for salamanders in Waterton Lakes

The long-toed salamander, a species of special concern under the Alberta Wildlife Act, has a limited breeding range, which includes Waterton Lakes National Park. Scientists discovered that vehicles were killing between 10% to 41% of the salamander population attempting to cross roads within natural salamander range. 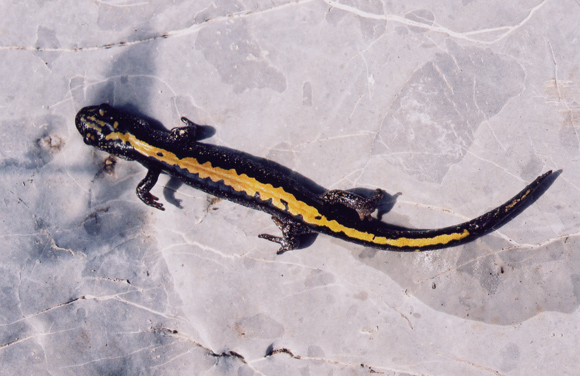 In 2008, the park implemented a novel idea: installing four tunnels under the road to provide a relatively safe passage between the salamanders’ over-wintering habitat and their breeding habitat at Linnet Lake. Cameras placed in the tunnels show that salamanders, as well other amphibians and small mammals, are using this safer route. The results are impressive: salamander deaths from vehicle traffic have been reduced to between 0.6% and 1.6% of the population.

Understanding the secret lives of badgers in Kootenay

By hunting rodents and providing dens for several species of mammals and birds, badgers are an essential part of the grasslands ecosystem. These secretive animals, however, are seldom seen, leaving scientists in the dark about how to protect them.

In 1996, Parks Canada teamed up with other partners in an intensive six-year tracking study of badgers in the East Kootenay region of Southeast British Columbia. By fitting the animals with radio transmitters, scientists learned much about their population, habitat, range and behaviour. Badger numbers in the area are low: only 60 breeding adults were found, and one-third of tagged females failed to reproduce over the study period. At the same time, about one-fifth of the tagged animals were killed by vehicles, trains and other predators. Thanks to data generated by the research, the badger was upgraded from “not at risk” to endangered.

In 2002, partly due to these findings, badgers from the state of Montana were relocated to British Columbia—including areas adjacent to Kootenay National Park—to augment the local population. The strategy was a success: less than four years after the relocations began, the badger population appeared to be growing, with some animals beginning to use parts of the park. Today, Parks Canada is working with researchers, private land owners, First Nations and other government agencies to develop a comprehensive recovery plan for badgers.

Over-fishing, loss of habitat, inter-breeding and competition with non-native species have reduced the distribution of native populations of Westslope cutthroat trout in the mountain national parks. In British Columbia they were listed as a species of Special Concern under Canada’s Species at Risk Act in 2010. 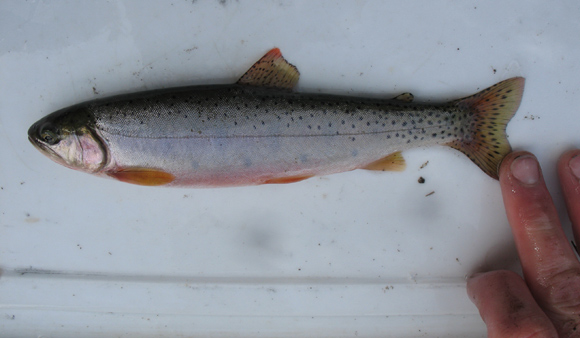 In Yoho National Park, the species appeared to be locally extirpated in their historic range. Thanks to past stocking efforts, however, the trout has found a new home in lakes within the O’Hara Valley, which is outside their historic range. While the population is genetically pure, it is still relatively small and remains at risk.

In 2008, to support the recovery of cutthroat trout, Yoho launched an education campaign to encourage voluntary catch-and-release in Lake O’Hara. A year later, the park put new rules in place to protect the cutthroat trout population, reducing possession limits from two fish to none. Today, park managers are closely monitoring the status of the trout. 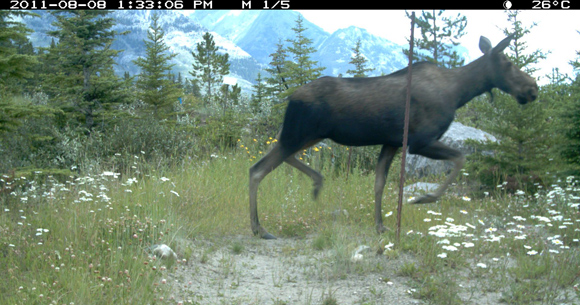 Conservation policy in the Mountain National Parks has come a long way from replenishing game animals for hunters. Over our first 100 years as an organization, we have moved from basic resource management towards an ecologically based approach that values native biodiversity and natural processes. Today, Parks Canada is a world-leader in conservation. From building animal crossing structures to reduce habitat fragmentation to reintroducing fire on the landscape to promoting animal health, no matter what size or shape, we are proud of our accomplishments and hopeful for the future. As we start our second century, we remain open to what experience, observation and science can teach us about conservation.