A tale of two species: black and grizzly bears

Perhaps no animal has as rich a mythology as do bears. From the constellations of ancient Greece to Winnie, Yogi, Smokey, and the enduring Teddy Bear, we surround this creature with adoration. They symbolize the Canadian wilderness though most Canadians have never seen a bear in its natural habitat. British Columbia is one of the few places in the world that still has significant numbers of bears. However, as our ecological footprint expands, grizzly bears in particular are relegated to ever shrinking wilderness areas. 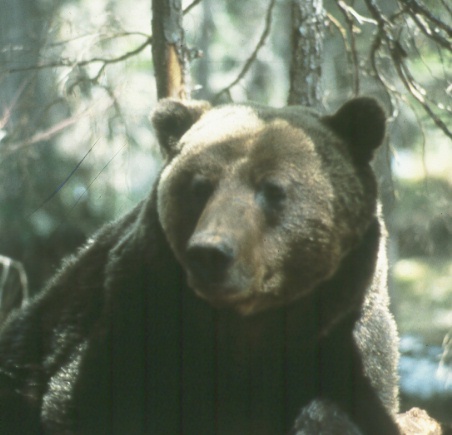 Grizzly bears range in colour from dark brown to blonde. Their name in North America comes from the most prevalent fur colouring which is a dark brown hair with a blond tip. In the Columbia region their weights average 102 kg for adult females to 168 kg for adult males. Larger bears occur on the Pacific coast where they have access to spawning salmon.

Grizzlies have a dished shaped head with ears that are proportionally smaller than black bears. A prominent shoulder hump of muscle can help distinguish grizzly bears at a distance. This muscle mass assists the bear to dig for flower bulbs and ground squirrels with their long (up to 10 cm), relatively straight claws. These are worn shorter by digging as the summer progresses. 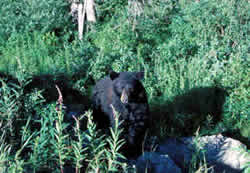 Black bears have short, curved claws well suited to climbing trees. They arrived in North America from Asia about one million years ago and evolved to live in mixed forests and floodplains. In spring, they will climb to end branches of poplars to eat catkins leaving tell-tale claw marks on the bark of the tree. With the option of climbing trees, it is thought that black bears are less aggressive than grizzlies.

Grizzly bears arrived in North America relatively recently, about 20,000 ~ 50,000 years ago. They evolved in the treeless plains of Asia where there was no escape up a tree. Hence their tendency for aggressive behaviour when defending cubs or food.

Both species of bears will scratch around and turn over rocks and logs looking for insects or tear bark off conifers and rake their front teeth along the cambium layer for a sticky treat. Relative to grizzlies, black bears tracks have more of an arch in the pattern of the toes and the claw marks are close to the toes. The size of the track can not identify the species as there are small and large bears of both kinds.

Bears communicate their presence to each other by leaving their scent on convenient trees on travel corridors which sometimes are also human trails. Typically a bear will brush past the tree. Less frequently, it will stand and use it as a back scratcher. This action can leave behind a few hairs caught in rough bark or in pitch. Hair, tracks and scat should alert you to the presence of bears in the area.

Black bears are much more likely than grizzlies to use areas adjacent to human development. The most reliable place to see a black bear is early morning during spring, along a roadside feeding on dandelions. If you wan to observe them, park well off the road and remain inside your vehicle. Never offer food. Bears that learn to associate people with food invariably end up dead.

Grizzlies are no longer found in 99% of their former habitat in the contiguous 48 United States and Mexico. However, black bears are still found in most of their historical range. Grizzly bear and black bear habitats often overlap and so do many of their conservation and public safety issues.

Human behaviours are the single most destructive force in the life of a bear. Research by Dr. Bruce McLellan and his colleagues indicates that in an area including southern British Columbia and Alberta and the adjacent states of Montana, Idaho and Washington, four out of five grizzly bears die at the hands of man. Citing concern over the sustainability of grizzly bear populations, the European Union recently banned the import of grizzly bear parts, including trophy hides.

In this region of British Columbia, the network of railways, highways, and logging roads has dramatically increased in the past 50 years. Increased access to remote valleys facilitates both poaching and legal kills. Census work indicates that fewer grizzlies are found in roaded valleys.

The national transportation corridor (the Trans-Canada Highway and the Canadian Pacific Railway) is the most significant internal issue affecting the ecological integrity of mountain national parks. With regard to bears, they are attracted to the railway by grain spills and to the roadsides by dandelions and clover. Between Field and Revelstoke, collisions with vehicles and trains account for an average of 17 bear deaths per year.

Shy bears may be repelled from the noise and commotion of well used roads. Currently, up to 9,000 vehicles and 40 trains per day pass through Glacier National Park. Results from radio-collared bears show that grizzlies almost never cross the Trans-Canada Highway. There is concern that over time, the highway could fracture and isolate bear populations into unsustainably small groups.

The region surrounding Yoho, Kootenay, Mount Revelstoke and Glacier national parks is near the front line of the shrinking grizzly range in North America. The pattern of local extinction within the grizzly's Canadian range will undoubtedly continue unless deliberate efforts are made to prevent it. Whether or not we are willing to allow large areas of land to remain in a sufficiently wild condition may be the determining factor in keeping this animal a part of the Canadian landscape.