Wildlife-vehicle collisions due to increased traffic on the highway through Kootenay National Park are endangering wildlife and travelers. From 2013 to 2015 nine underpasses and 15 kilometers of wildlife fencing were constructed in the park. Animals began using these underpasses within months of their construction. We anticipate a significant improvement in the safety of the highway as a result of this project.

What work was done? 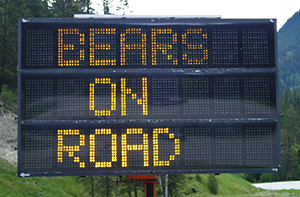 In 2013 Parks Canada fenced over 4.5 km of highway and built one large elliptical and two smaller concrete box culvert underpasses in a high wildlife-vehicle collision area within Kootenay National Park. An additional box and five elliptical underpasses were built in 2015 along with over 10 kilometres of fencing.

Other measures have been implemented to reduce road-related wildlife mortality, such as temporary speed zones, new wildlife crossing signs where animals are frequenting roadsides, and roadside light boards to warn drivers to slow down when wildlife is present.

The crossing project also includes improvements to visitor facilities. Last spring an interpretive exhibit was installed at the Radium Hot Springs pools. In 2016, extensive upgrades have been made to the Dolly Varden picnic site with installation of a new privy and picnic shelter. Interpretive signs and activities will be installed at the site in 2017..

Will the whole highway be fenced?

We are looking at future options for highway fencing and crossing structures in other areas of the park. Future phases have not yet funded.

Why not use speed enforcement and education instead of fencing?

Research has shown that enforcement and education are best used to support other measures to reduce animal vehicle collisions.

Why use underpasses rather than overpasses?

Underpasses are effective wildlife crossing structures that meet the needs of animals.

Will the wildlife crossing project work? 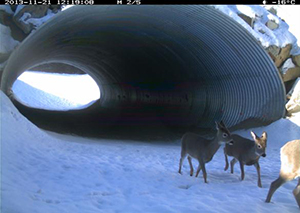 Roadside fencing in other areas, including along the Trans-Canada Highway in Banff, has been at least 80% effective at reducing wildlife-vehicle collisions. We expect similar results for roadside fenced areas in Kootenay National Park.

Monitoring of the fenced area and underpasses began in 2013 and is verifying their effectiveness. The initial three structures are being regularly used by white-tailed deer, occasionally by wolves, and sporadically by moose, mule deer and black bear.

Will the fence impact the view?

The fence is much lower than the adjacent trees. Mountain views remain unobstructed. With time, weathering will make fencing less obvious.

How much did the project cost?

The cost of engineering and construction for the first phase was four million dollars. The second phase has a budget of $9.6 million.

Isn't this a lot of money for a few km of highway?

Measures with proven effectiveness have a cost but it is outweighed by the benefits. Collisions with wildlife cost money too – for emergency response, hospital care, vehicle repairs, loss of wildlife and dealing with dead or injured animals. Even when no humans are injured, these accidents can be traumatic.

These crossing structures are essential to maintain wildlife habitat connectivity in the Kootenay Valley.

Why focus on reducing collisions with deer rather than moose or bears? 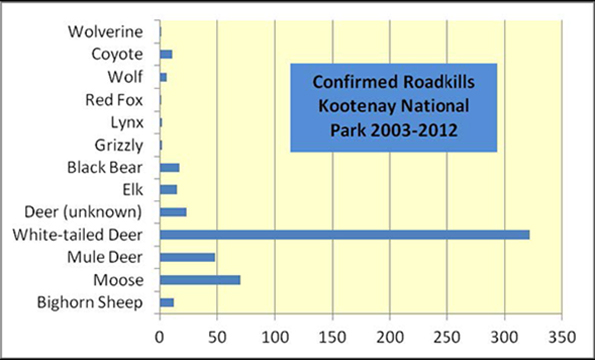 More than 530 large and medium sized animals were confirmed killed on the highway in the decade before fences and crossing structures were built.

Deer, especially white-tailed deer, are involved in the greatest number of wildlife-vehicle collisions in Kootenay National Park. Moose and bears are relatively dispersed; there is no strongly defined crossing zone involving these species. In contrast, deer congregate along predictable areas beside the highway, such as by the Dolly Varden picnic area. The project area had significant deer-vehicle collisions, however, this area also had collisions involving elk, moose, wolves, fox, coyote and other species. Over the long term, most species will benefit from highway fencing and crossing structures.

Can’t you create better habitat further away so the deer aren't attracted to roadsides?

Parks Canada continues to plan and implement habitat restoration work. However, roadside vegetation is extremely attractive to deer during the spring, concentrating deer populations beside the unfenced highway. 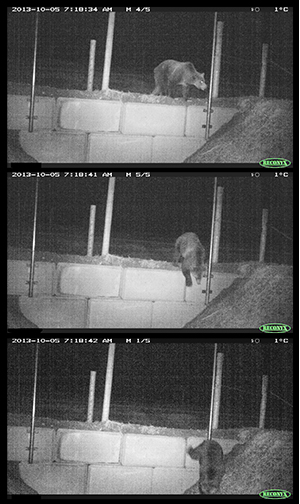 'Jump-outs' allow animals that have entered the fenced area to escape.

How are fence ends handled?

To keep animals from entering the fenced areas angular boulders have been piled adjacent to the fenced ends. The rocks work best for deterring hoofed animals. An electromat has also been installed at Kootenay Crossing. Electromats give animals an uncomfortable but harmless shock while having no effect on vehicles, bicyclists or pedestrians wearing shoes.

Will I be able to get through the fence?

Why is there a cable on top of the fence?

This strong cable helps protect the fence in the event a tree falls on it.