Of young caribou and old spirits

In the Arctic, the clear dry air sometimes makes distant glaciers and mountains seem very close. Something similar happens with Arctic archaeological sites: the past seems vividly near.

For Inuvialuit (the people of Canada’s western Arctic), the site known as Many Caches is just such a place. To them, this ancient hunting camp is part of a living past that needs to be documented and protected.

Parks Canada archaeologists Sharon Thomson and Stacey Taylor also understand the power of Many Caches. They recall a day spent there in the company of Norman Kudlak Jr., a local Inuvialuit wildlife monitor.

A thick fog rolled in as the team worked. After placing a tobacco offering at the site, they turned back to camp. Just then, a female caribou walked out of the fog not five metres away and then disappeared into the mist.

“It was so evocative of the generations that have gone before and their relationships with the animals that sustained them,” says Ms. Thomson. Ms. Taylor adds, “It was incredibly moving.”

The place of young caribou

Tuktut Nogait National Park is home to the calving grounds of the Bluenose West caribou herd (“tuktut nogait” means “young caribou” in the language of the Inuvialuit).

The first objective in creating the park was to protect the caribou, an animal vital to the Inuvialuit way of life.

To this end, the Tuktut Nogait Management Board—which includes appointees of the Inuvialuit, the Sahtugot’ine (Déline) and government—asked Parks Canada archaeologists to record the features of Many Caches. The goal was to prepare a site monitoring and protection strategy. 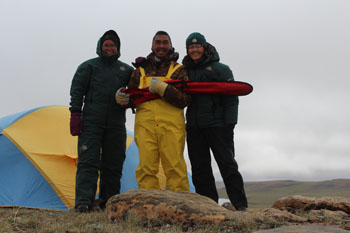 Stacey Taylor, Norman Kudlak and Sharon Thomson on site at Many Caches.

Ms. Thomson and Ms. Taylor began working at Many Caches in July 2017, recording the site through photographs, field notes and drawings.

“It was stunning,” says Ms. Taylor, an archaeologist of Anishinaabe heritage who works primarily in Ontario.

“I’ve never seen such a huge site—and with no trees to obscure it.”

Many Caches gets its name from the dozens of stone structures on the site that were used by the inhabitants to cache caribou meat.

It is a perfect place for a hunting camp, since the site overlooks a caribou crossing on the Hornaday River.

“Many Caches reveals itself slowly.

"Approaching the site along a high limestone ridge, your attention is captured by the Hornaday River coming into view below. On a sunny day the saturated colours of the bright blue water against the velvety green plain are breath-taking.

"Up on the ridge, the Arctic landscape seems broken only by low piles of stones or the occasional willow peeking from a protected hollow. But then, you realize that the stone piles are caches—large, vaulted storage structures, skillfully fitted together from slabs of limestone.

The scientists are still working to establish the age of the site. Two fragments of caribou bone found there were radiocarbon dated at 250 years old and 400 years old.

Ms. Thomson says the site appears to have been used repeatedly for a very long period of time. It was probably used by coastal people who came inland in the summer and fall to hunt caribou and to fish, returning to the coast in the winter.

“We’re not hunters, so we don’t know all the nuances of animal behaviour”

Mr. Kudlak, from the nearby community of Paulatuk, shared his knowledge of local plants and Inuvialuit hunting practices.

“It was very interesting to get Norman’s take on things,” says Ms. Thomson. “We’re not hunters, so we don’t know all the nuances of animal behaviour.” 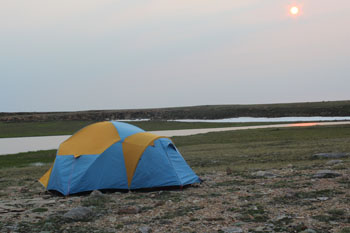 Camping under the midnight sun at Many Caches

She gives the example of a stone feature that piqued the archaeologists’ interest: could it have been a hunting blind?

Mr. Kudlak thought so—and got behind the blind to demonstrate how hunters might have used it to watch for wildlife.

The scientists were heartened by the support and interest of the local Inuvialuit people, especially the Elders. “You get a strong sense of peoples’ pride and respect for what their ancestors did,” says Ms. Thomson.

For Ms. Taylor, visiting the site was a career highlight. She has written that uncovering artifacts is like “shaking hands with the ancestors.” At Many Caches, the ancestors seemed to be right there, shadowy but real, going about their daily lives.

“As an archaeologist, I have a great appreciation of the importance of keeping a connection with the past. Walking among the spirits at Tuktut Nogait reaffirmed this belief.”